The fourth post for the A-to-Z Blogging Challenge, D Is For... Directing: 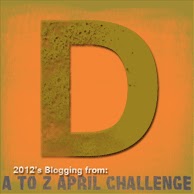 I recently accepted a job working for a term at a local college of further education on their BTEC Performing Arts course and will be directing two shows. I have directed bits and pieces in the past: Caryl Churchill's Far Away whilst at university, a piece that I wrote called Four Doors Down during the Bike Shed Festival, a version of Harold Pinter's The Dumb Waiter with the second year students at this very college and I have assisted other people with several productions over the years.

This is the first time that I have had to choose a play for others to perform in this manner. It wasn't a blank slate, it never is, but having to choose a play that serves a cast of sixteen, can possibly incorporate songs, but isn't a musical and is suitable for students. After reading several plays, I would get so far in to a play I liked and then face a wall of impenetrable Russian, Jacobean verse or swearing that proved unsuitable for the age group.

After much deliberation I have decided that the first years will be performing The Cherry Orchard by Anton Chekhov.

I'll keep you posted on our progress...
Posted by Dave at 00:01
Email ThisBlogThis!Share to TwitterShare to FacebookShare to Pinterest
Tags: Blogfests, Directing, The Cherry Orchard, The Dumb Waiter, The Undiscovered

I've always wanted to write a play. How exciting you will get to direct. Awesome!

Nice to meet you.

Good luck with it!

Hope it turns out well.

Good luck with it Dave!
It's so nice to meet a fellow Brit here in blogland. I don't know how many people you follow and are followed by on here, but have you found that they are mostly from the USA? I have, and as interesting as it is reading their work, it's nice and refreshing to hear an English "voice" as a nice change.

I'm looking forward to reading more of your work as the challenge unfolds. Best wishes, Pam

DL Hammons @ Cruising Altitude 2.0
Co-Host of the Blogging from A to Z Challenge.

Very exciting, Dave! Hope it is a blast!!

I have taught btecs too though this topic so know what you have to contend with. Good luck with the play.