My ninth post for the A-to-Z Blogging Challenge, I is for... I Drew This 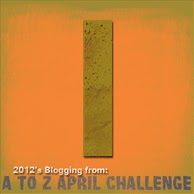 Someone gave me a sketchbook and after ignoring it for months, I decided it would be a waste if I didn't use it. I'm not particularly good at drawing, but I've discovered that I really enjoy it. I prefer to draw with fine marker pens and mostly in black. The drawings that I like most have some sort of narrative to them.

I was looking through the sketchbook the other day and I decided to post some of the better pictures on here. I don't have a scanner so these are awkwardly taken photographs of the pages of the book propped open. A couple of them are a bit blurrier than I would like. Sorry. 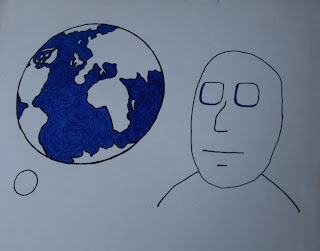 I probably drew round something for the shape of planet Earth and Africa looks a bit weird. I've drawn lots of variations of this blank-faced character over the years. 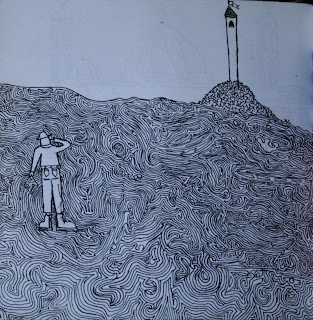 The proportions on this adventurer aren't very good, but I really like the detail (and lack of detail) in the landscape. 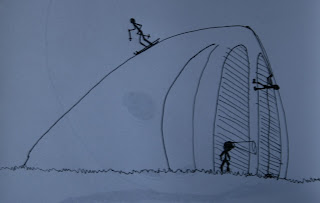 It's a nose. I've always been fascinated by the Sphinx's missing nose. Here's an idea of what we do with a massive stone nose. The black dot on the side of the nose is something showing through from the next page. 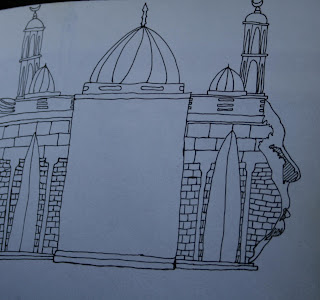 I must have traced Alfred Hitchcock, I'm not that good at faces. I can't explain why I wanted to put him on the end of what looks like a Mosque. 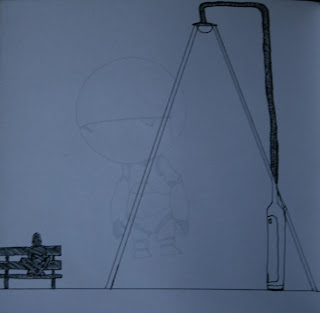 This is probably the first time I got the proportions of the human form to look right. Sadly you can see the ghostly form of Marvin the paranoid android from the movie of The Hitchhikers Guide To The Galaxy floating through from the next page, which somewhat lessens the impact of this picture.
Posted by Dave at 00:01
Email ThisBlogThis!Share to TwitterShare to FacebookShare to Pinterest
Tags: Blogfests, Hitchhiker's, I Drew This

Not bad!
And Dave, I tried to comment on your post for Monday but for some reason I never could pull up your website. I'm sorry!

Cool artwork. I also like the detail on your landscape drawing. Some of your pictures have a surreal quality to them.

You should draw more.

Alex J. Cavanaugh, thanks! I don't know what happened yesterday, it worked for me. Here it is.

Gillian, thanks. I should draw more, but it's easy to get out of the habit. These are the better ones. I've drawn plenty of rubbish as well.

You are very creative. I enjoyed your sketches.
dreamweaver

These are great! You have a really interesting style and I can see you getting better and better as you create more drawings. Thanks for the posts!
famous shakespeare quotes

I kind of love your drawings and your commentary makes them even better. I hope you're keeping it up and filling up the rest of the sketch book!

I like the planet earth drawing as well as the one with the mosque. You won't know how well you'll do at drawing unless you try so that is a good start. Even better that you are doing an activity that you actually enjoy!

I used to doodle a lot when I was in high school. Super heroes mostly! I could spend hours upon hours doing that. Those were the days!

Marissa, thanks. I didn't realise I had a style at all.

DL Hammons, the word doodle always makes me think of this quote from Buffy: "A doodle. I do doodle. You, too. You do doodle, too."