Here's my twenty-second post for the A to Z Blogging challenge, V is for... Vegetarianism: 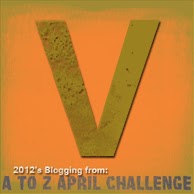 My girlfriend is a vegetarian. I am not.

It's not as big a deal as you'd think. I'm not so much of a carnivore that I can't live without meat and she isn't so much of an ideological vegetarian that she won't cook the odd sausage.

As I've said before I'm not much of a cook, I'm more of a defroster. I do a lot of washing up to attempt to make up for my culinary shortcomings. Understandably, when Sarah cooks she mostly cooks without meat. I really don't miss it. It's nice to have the odd meat dish from time to time, but I think that the infrequency of it in my diet now means that I enjoy it all the more.

Sarah has been a vegetarian all her life and is oddly curious about meat preparation. She doesn't know much about meat preparation and why should she? It's not until she asks me a question about meat that I realise how little I actually know. All those things that would never occur to me. "Why do they do that?" I rarely have a satisfactory answer. TV cooking shows are a bit of a minefield with phrases like "soaking in its own juices" and talk of meat on the bone, blood in gravy or even euphemistic names like suet or crackling, which help you to forget what they actually are.

It works both ways, I didn't know what Quinoa was until I met Sarah. It's pronounced Keen-wah and is very handy in Scrabble.

The strangest thing is the fear. Nothing in vegetarian cooking can kill you. You can't get food poisoning from lentil soup. Even if you don't eat meat you've heard that juices need to run clear or that something can be burned on the outside and raw on the inside. The fear of a vegetarian who isn't used to cooking meat is palpable.

Funny quote. We don't eat a lot of meat in our house. When we do, it's usually chicken. We both cook so we've tried numerous new recipes with success. If nothing else, we're healthier.

The simple view is what you eat today is walking and talking tomorrow, LOL.