My twenty-third post for the A-to-Z Blogging Challenge, W is for... Writing 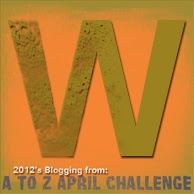 I used to say that I turned to writing for all the wrong reasons.

I started writing out of frustration. Frustration that I couldn't make things happen in any other field of my endeavour without someone else's help in some way, but I realised I could write alone. Frustration also that I saw, read, auditioned for and was involved with several shows which were saddled with truly awful scripts. I figured I could at least try and write a better script.

I wrote bits of scripts and I really enjoyed it, so I kept at it. I wrote a play, which might well see the light of day eventually. It might not, but writing it gave me the confidence to write more. Whilst at university I wrote for two shows that I was in and that was a new experience. Writing something that you'll eventually perform is very liberating.

The Mr Carruthers Presents, Behind The Bike Shed and Train Of Thought shows provided me with deadlines, which meant that ideas that before would have probably rattled around in my head with me thinking, I must get around to writing that. Instead those ideas would get written. I wrote plenty of comedy sketches and looking back some of them might still be funny.

The act of writing hasn't gotten any easier for me, but I do find it easier to know when it's right. Sometimes the hardest thing is to know when to stop rewriting. I used to agonise over it, now it seems a little easier.

I started writing prose, short stories, non-fiction and I took part in many a Microfiction Monday. I have several projects on the go at the moment, now my problem is finding the time to focus on one long enough.

I used to say that I turned to writing for all the wrong reasons. I've since realised there are no wrong reasons.
Posted by Dave at 00:01
Email ThisBlogThis!Share to TwitterShare to FacebookShare to Pinterest
Tags: Blogfests, Writing

Exactly. If you realize you can write better than the material you're presented with, then it's not a mistake.

I can identify with the act of writing not any easier, just better at it.

Tony, and even if I couldn't write better material, there's no harm in trying...

Alex, I suppose if anything it gets more difficult because you personally set the bar higher each time.

I don't know why I started writing. I'm certainly not very good at it, but it's fun and I'm enjoying it. Maybe that's reason enough for me.

Just by writing and more writing, I find I am getting better and better at it. Blogging has helped enormously and I didn't realise it would do that. I started writing for one reason and then discovered I loved just the actual act of sitting down and writing - that buzz when you think you've actually written something that is worth reading. What a high.

I've just realised this is the hundredth post that I've tagged with Writing. Seems appropriate.

Claire Hennessy, I'm glad blogging has made a difference. I sometimes wonder... And if enjoying writing becomes an end in itself then you're on to a winner.

Hello, Dave! I like hearing how other writers got started in this life. Wishing you all the best with your writing!

Have a lovely week and happy A to Z!!

Hello, Laura, thanks and you too.