Here's the eighteenth post of the A to Z Challenge, and R is for Rhinoceros: 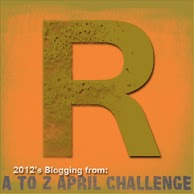 When I was about three years old we went to Windsor Safari Park. We trudged from enclosure to enclosure and seeing animal after animal that didn't seem to realise they were on show. The gorillas were largely absent, the insects were probably hidden in plain sight and the more visible animals were all of a sort that failed to capture my young imagination.

We walked over to the Rhino enclosure and true to form they were all in the far corner and tiny. Apparently I wasn't standing for any more of this nonsense. My father says that he looked down and I was stood next to him one minute and the next I was gone. He looked around him and and there was no sign of me. He looked up and saw a tiny child on the wrong side of the fence...tottering towards the Rhinos.

Panic ensued. After seconds which probably seemed like aeons to my parents, zookeepers hoisted me out and I was safe. The Rhinos probably barely noticed the fuss. I have a memory of it which I'm sure is mostly derived from hearing my father talk about it. I've always liked Rhinos ever since. 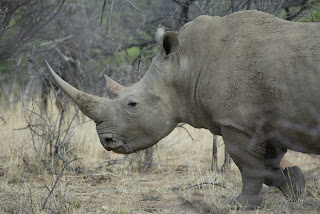 When Marco Polo saw a Rhinoceros on his travels he was convinced it was a Unicorn. Unlike most of their contemporaries, the Rhinoceros has barely been anthropomorphised and seems to have made very few appearances in fiction. Babar The Elephant's neighbours, and the animal that kills the hero's parents in Roald Dahl's James And The Giant Peach are two notable, if unflattering, exceptions (and talking of Rhino escapes: this is astonishing). One of the vehicles in M.A.S.K. was called Rhino, but I'm clutching at straws by mentioning it here.

Three of the five species of Rhinoceros are defined as critically endangered. If you want to help prevent this situation worsening, please donate to Save The Rhino.
Posted by Dave at 00:01
Email ThisBlogThis!Share to TwitterShare to FacebookShare to Pinterest
Tags: Blogfests, M.A.S.K.

Very interesting. My son is enamored with large animals, the rhino among them, and we not only have to visit them at the zoo, but every time we go to Cabela's, we have to spend a while at the large animal exhibit. I was only aware of two species of rhinos, and I was pleasantly surprised to learn there are more.

I'm rooting for the rhino.

You just wanted to see the rhinos!
Killing animals just for parts is dumb anyway, let alone for parts that don't work.

When I ran the London Marathon I was amazed at the people running in aid of Save The Rhino wearing Rhino costumes. Running 26 miles is hard enough, but running 26 miles carrying an extra 32 lbs/7.5 kg is madness.

If people are willing to endure such madness for an animal thousands of miles away, that's got be worth something.

They have the most amazing ears. Huge with delicate fringes all the way along each edge. Noticed this as my personal revelation last year at Indianapolis Zoo.

A-Z passer by and new follower.

Enjoyed reading about your rhino experience.

I saw the movie 'Hatari' as a youth. It is a John Wayne movie from the early 60s I think. I remember one of the characters being gored by a rhino. As campy as that movie is, it did give me an interest on going on safari one day to see the animals up close - with any shots being taken only with a camera though. Great post!

Amanda Heitler, I've never noticed their ears before. Thanks.

Wendy H, I've never heard of Hatari, I'll have to try and find it. Thanks.