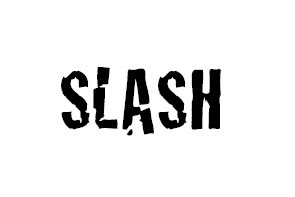 An appropriate night to be filming a comedy horror short film in Bournemouth...
Posted by Dave at 10:00 No comments:
Email ThisBlogThis!Share to TwitterShare to FacebookShare to Pinterest
Tags: Acting, Slash 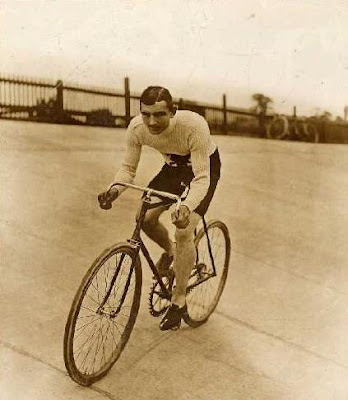 Arthur Linton was born in 1872 in Somerset but grew up in Aberaman in South Wales. He held a great many British records at distances up to 200 miles and became one of the great cycling champions. In 1893 he signed as a professional cyclist to ride a under the tutelage of the amazingly named trainer ‘Choppy’ Warburton.

1894 saw him defeat the French Champion in Paris, lose out by a narrow margin to the Italian Champion, who thereafter refused to race him again. In spite of this he was given the title ‘Champion Cyclist of the World’.

While 1895 was an injury prone one for him, the following year saw him achieve celebrity status in France after victory in the 1896 Bordeaux to Paris race. Tragically, this race looks to have taken its toll on his body and Arthur Linton died in June 1896, just six weeks after the race. He was just 24 years old. Reports differ as to whether he succumbed eventually to Typhoid Fever or the possibility that he was the first athlete to have died as a result of drugs in sport. ‘Choppy’ was implicated in the deaths of Arthur’s brother Tom and Jimmy Michael as well. He was banned from the sport although his guilt or innocence was impossible to prove.

Arthur Linton has been recognised by the Rhondda Cynon Taf Council’s Blue Plaque scheme and Arthur Linton is commemorated today for his achievements with a plaque mounted on the house where he lived in Aberaman.

According to Cllr Robert Bevan, Rhondda Cynon Taf Council’s Cabinet Member for Culture and Recreation: “Arthur Linton’s life was quite remarkable and I’m pleased to see that his many achievements are still being celebrated more than a century after his death. His rags to riches story will undoubtedly inspire all those who hear it.”

Arthur Linton was my great-great-uncle. 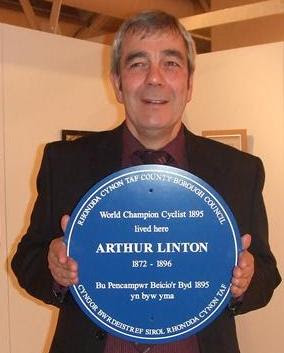 (Photos above: Arthur Linton on his bike circa 1896 and my father holding his blue plaque 113 years later.)
Posted by Dave at 10:00 6 comments:
Email ThisBlogThis!Share to TwitterShare to FacebookShare to Pinterest 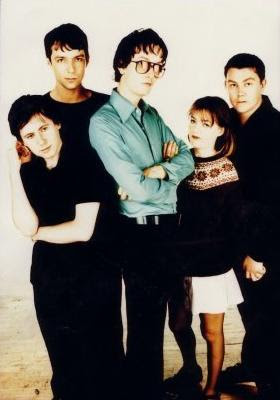 From 1997 to its close in 2002 I was a member of Pulp People, the fan club of the Sheffield band. Over the years newsletters were sent out as and when there was enough news to fill them. Many included a feature called 'Ask Dr Pulp' in which assembled members of the band would answer questions sent in by fans.

Since GQ have recently printed an interview with Jarvis their editor conducted for The Sunday Times in 1998 practically verbatim and passed it off as new, it seems as if anything goes. So here are the questions the good Doctor asked Candida Doyle, Jarvis Cocker, Mark Webber, Nick Banks & Steve Mackey on my behalf, presented here as if in the form of a continuous interview. I seemed to have a knack for asking the wrong question:

Why is The Day After The Revolution “so bloody long”?
Candida: “Don't ask me!”
Jarvis: “The song itself is only the regulation four minutes”
Mark: “What kind of a stupid question is that?”

How democratic are decisions made within the group?
Nick: “Sometimes it's difficult for decisions to be made by committee. Pulp democracy changes depending on the subject in question.”
Candida: “I'll have to come to an agreement with the rest of the band before I answer this one, unless Jarvis has a particular answer.”

Do Pulp think Britpop is dead, and does it really matter?
Candida: “Well, I never liked the Britpop idea but the sad thing is, now that it's gone - which it has - what we are left with is much much worse, and that does matter.”
Nick: “Thank god, yes, and not in the slightest.”

What goes into consideration when deciding on a set list?
Mark: “Far too much. It's not interesting.”
Jarvis: “Biorhythms, chakra alignments, I-Ching forecast, personal hygiene, proximity to ley-lines centres of earth magic, closing time.”
Steve: “Whatever Jarvis feels like playing…”

Originally published in Issues 24 to 28 of the Pulp People Newletter.
Posted by Dave at 10:00 No comments:
Email ThisBlogThis!Share to TwitterShare to FacebookShare to Pinterest
Tags: Interviews, Pulp, Writing 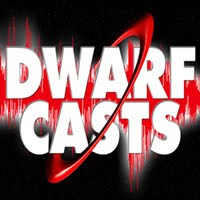 I finally got round to listening to Ganymede & Titan's DwarfCast 19, their instant reaction to Red Dwarf's Back To Earth, Part One and to my surprise a comment I made on their website was read out at about twenty minutes in.

Posted by Dave at 10:00 No comments:
Email ThisBlogThis!Share to TwitterShare to FacebookShare to Pinterest
Tags: Red Dwarf

Without doubt, one of the most clever shows I will have seen this year is going to be “Train of Thought,” a terribly fun event that took place for just barely a week. The concept, as it was explained to me, was that you would ride the tube and be able to hear the thoughts of the other riders. This massively clicks with several of my interests, most specifically, site specific performance and, um, not telepathy but the concept of a dreamtime where you experience several different layers of reality (many pasts, for example) while being aware of being in the now. (I also am interested in the Tube in general, not to a freakish level of geekishness, but enough.)

Anyway … the play was more fun than I expected, despite having many of the challenges I associate with site-specific works. (If you go to a lot of these, you realize that the vagaries of the space, especially if it is a public space, is something you just have to deal with. You’re not going to sit down in your chair and have an usher and get drinks during the interval – it’s just not how it works.) We actually met a “conductor” before the show (and were caught up with the rest of the group), but then had to wait 20 minutes for a circle line to show up.

From then on, it was pretty smooth sailing. The gig was that we had headphones on listening to a radio station, and a little FM transmitter was broadcasting to us on “The Oracle Line” (marked on a map we were given out before we boarded), which said what the names of the different stops were as we pulled up to them – and admonished us to Mind the Gap as we exited the train. It also let us in on the thoughts of our other passengers, in a series of vignettes – from the usual mindless “where’s my book” to “God, look at these pictures of us when we went to Barbados …” to “I hate my job” – but as you heard the “thoughts” played you cast your eyes about the train trying to figure out who was “thinking” them. I had total synchronicity with the “where’s my book” guy – it was really just like reading his mind! I found this ridiculously pleasant.

While I did have problems with reception at times, overall this was a great play and I can’t wait to see what Minkette will do next time!

(This review is of a performance done Friday, December 14th.)
Posted by Dave at 10:00 No comments:
Email ThisBlogThis!Share to TwitterShare to FacebookShare to Pinterest
Tags: Reviews, Train Of Thought

We've reached the end of the line for the Train Of Thought.

The third and final piece I wrote for Train Of Thought. This was not included in the show, judge for yourselves. I play Trevor, again recorded by David Aldhouse.
Posted by Dave at 07:58 2 comments:
Email ThisBlogThis!Share to TwitterShare to FacebookShare to Pinterest
Tags: Acting, Train Of Thought, Writing

The Life & Death Of Thomas Cromwell 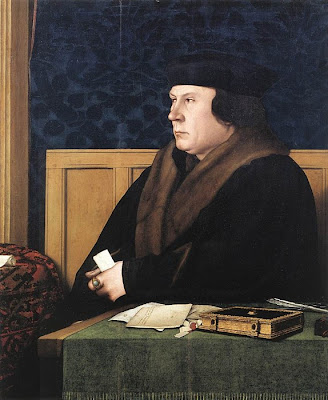 I'm taking part in a rehearsed reading today of Thomas Cromwell, a play which some scholars think may have been written by Shakespeare. Well, bits of it anyway, with a group of friends and probably under the influence.

It hasn't been performed for four hundred years and there may well be a good reason for that. All that changes today at 2pm here.
Posted by Dave at 10:00 No comments:
Email ThisBlogThis!Share to TwitterShare to FacebookShare to Pinterest
Tags: Acting

Twenty eight years ago today I sprang forth and the planet was never the same again. 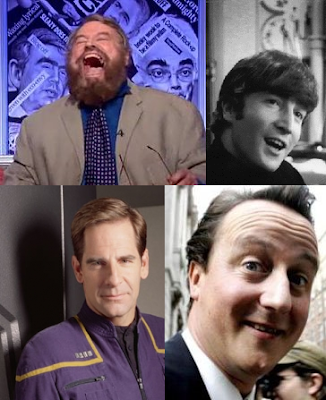 Shame about David Cameron, but what can you do?

Posted by Dave at 00:01 No comments:
Email ThisBlogThis!Share to TwitterShare to FacebookShare to Pinterest

Since my storyline for Episode 2 of Chain Gang 2009 wasn't chosen, here it is:

Brian and Susan return to their hotel room. He is amorous, but she is distracted. When she undresses he gets even more amorous, but she gets in the shower instead, much to his disappointment.

Loudly, over the noise of the shower, Brian and Susan have an awkward conversation which leads to his calling reception to find out if there are any other Fergusons staying at the hotel. The voice on the phone tells him they cannot give out guest’s personal information and Brian ends the call, then loudly for Susan’s benefit states that reception said there are no other people called Ferguson staying there.

Brian is bored and tells Susan he's going out to get her something, it’s a surprise. Susan gets out of the shower, but he’s gone. She remembers the piece of paper the other Mrs Ferguson gave her and rifles in various pockets to find it. When she does, she has to convince herself to unfold and read it. The writing on the paper reads ‘Look behind you…’
Posted by Dave at 10:00 No comments:
Email ThisBlogThis!Share to TwitterShare to FacebookShare to Pinterest
Tags: Chain Gang, Writing

The day gets off to a bad start for this commuter as the Train Of Thought arrives at the next station.

If you think Martyn overreacts and assumes the worst, spare a thought for the people on the tube during the performances who were not in the audience. A group of people arrive together all carrying radios and wearing headphones and furtively searching the carriage to try and work out which passenger is having these thoughts. It must have seemed pretty suspicious.