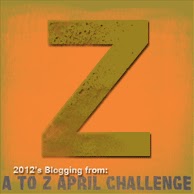 I'm sure this is a sentiment shared by many of you. After twenty-five posts this month it's almost time to sleep.

When I ran The Noughties Blogfest I followed it up with a debrief of sorts. I was going to attempt to write a debrief for this year's the A-to-Z Blogging Challenge, but we have the A-to-Z Reflections Post on the 7th of May, so I'll wait. 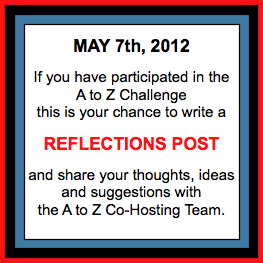 I've included the answers to the questions from my Q is for...Quiz post below, but if you haven't seen the questions and you want to take part in the quiz, you can do so here, if not you can scroll down for the answers...:


SCROLL DOWN FOR ANSWERS...


1) What 'A' is Buffy The Vampire Slayer's middle name?
Anne

2) What 'B' is a character in Harold Pinter's The Dumb Waiter?
Ben

3) What 'C' is the fictional Alaskan town in which Northern Exposure was set?
Cicely

5) What 'E' is the speed that Doc's DeLorean needed to reach to achieve time travel?
Eighty-Eight mph

8) What 'H' is the setting of Quatermass And The Pit?
Hob's or Hobb's, Lane or End

9) What 'I' is the US state that Star Trek's James T. Kirk says he is from?
Iowa

10) What 'J' is the company that owned Red Dwarf and Rimmer and Lister worked for?
Jupiter Mining Corporation

11) What 'K' is a shape-changing robot companion from Doctor Who?
Kamelion

12) What 'L' is the first name of the protagonist of Gulliver's Travels?
Lemuel

14) What 'N' is the epidemic that hit Royston Vasey in The League Of Gentlemen?
Nosebleeds

15) What 'O' is the leader of the Autobots in Transformers?
Optimus Prime

16) What 'P' is "Confidence is a preference for the habitual voyeur of what is known as"?
Parklife

17) What 'Q' illustrated most of Roald Dahl's books for children?
Quentin Blake

18) What 'R' is the company that owns the Dollhouse in Dollhouse?
Rossum Corporation

19) What 'S' is the name of Gandalf's horse in The Lord Of The Rings?
Shadowfax

20) What 'T' is Guybrush's surname?
Threepwood

21) What 'U' is the holiday being celebrated in Firefly's The Train Job?
Unification Day

24) What 'X' is the taxonomic name of the Alien from the Alien films?
Xenomorph

26) What 'Z' is the name of Futurama's physician?
Zoidberg

Thanks for taking part.

P.S. A date for your diary: I'm running The Nineties Blogfest on the 14th October 2012.
Posted by Dave at 00:01
Email ThisBlogThis!Share to TwitterShare to FacebookShare to Pinterest
Tags: Alien, Back To The Future, Blogfests, Blur, Buffy, Discworld, Doctor Who, Dollhouse, Firefly, Futurama, Lord Of The Rings, Monkey Island, Mr Benn, Northern Exposure, Pulp, Quatermass, Star Trek, The Dumb Waiter

October 14? Let me see if I'm booked. Just kidding! Even I don't book that far in advance.
You did it - twenty-six posts. Time to rest now.

It was great to be a part of something so frikken awesome. see you at the Reflection Post...

I agree with the zzzzz! Thanks for posting. Plus the quiz idea was awesome.

Awesome A-Z! What a buzz. I'll stay clued for the blogfest.

Hi! Stopping by for the A-Z Roadtrip. Congrats for finishing the challenge. I like your quiz:)