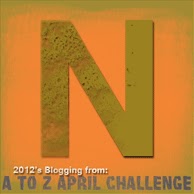 I've been working my way through my CV and writing about the various shows with which I've been involved. I'm up to 1905 (or for the purposes of the alphabet, Nineteen Hundred And Five AD).

In 2005, the New Factory Of Eccentric Actor staged 1905, a show about the failed Russian revolution of that year. The play was a promenade performance mounted twice during the hundredth anniversary year of the events, initially at Brunswick House and then at Mary Ward House in London.

The play followed the year's events, including the original Bloody Sunday massacre, and showed how they affected groups as diverse as strikers, their families, students, the Russian royal family and historical figures like Leon Trotsky, Henry Nevinson, Colonel Theodore Trepov and Tsar Nicholas II. However, The central characters for the audience to identify with were fictional: a student named Boris and the Petrov family with whom he stayed.

I played Tolya, an artist studying at the university and friend to Boris. I had about a half a dozen lines across three scenes and, apart from the ensemble scenes, was in the enviable position of watching the rest of the play with the audience.

Typically, New Factory shows have a very large cast and a rehearsal schedule that means people do as much or as little as they can, work permitting. This sounds chaotic, but it's really not. It may mean some actors do not meet until the day of the performance and yet it just goes to show that actors make it work despite the adversity.

The New Factory are a great bunch to be involved with. This was the first their shows that I took part in and I've been in another half a dozen or so since. I count myself very lucky to have met them. During the first production of 1905, I was lucky enough to befriend the late Matt Eggleton, who then introduced me to the Globe Players, which lead to me auditioning for Sleeping Beauty, and therefore me getting my first professional job. I owe him a lot. 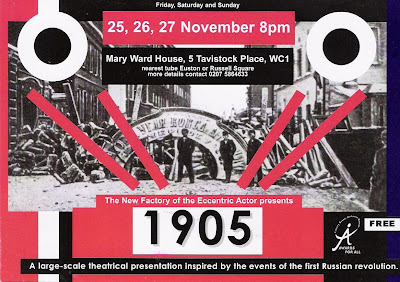 Here are couple of reviews:

Make space for political theatre
ZOE CORBYN reports on the New Factory of the Eccentric Actor and its extraordinary large-scale free theatre events.

"Maggots in the soup!" The puppeteers' chants grow louder and louder as a camera made of cardboard zooms in on angry toy sailors throwing their tyrant captain overboard.

A director screeches instructions in Russian through a giant megaphone.

The scene is a reconstruction of Battleship Potemkin, the famous silent film by Sergei Eisenstein which tells the story of the 1905 uprising onboard the Potemkin and its spill onto the streets and steps of Odessa.

Puppetship Potemkin is being bought to life by the New Factory of the Eccentric Actor.

It's a scene from their fifth production, entitled 1905, staged last weekend at the Mary Ward Hall in Bloomsbury in central London.

The play commemorates 100 years since the 1905 Russian revolution and tells the story of the fictional Petrov family, caught in a year of unrest in Russian history that is often seen as the dress rehearsal for the 1917 victory of the Bolsheviks over tsarist Russia.

But 1905 is not just any play. Indeed, the New Factory's political theatre has a rather special ethos.

"The production should be an event, an extraordinary event," explains the company's playwright and founder member Penelope Dimond. "We want people to come out saying: 'That was amazing - I've not been to anything like that before'."

And that it is. Staging large-scale shows in big spaces is a New Factory hallmark and 1905 boasts a cast of over 60 professional actors, musicians and performers. They intermingle with the audience to draw everyone into the show.

To see grand-scale experimental theatre is unusual these days. That it portrays an important piece of political history in such an interactive, entertaining and thought-provoking way is a rare and wonderful treat.

But working with such large numbers of people is no mean feat. "The first time everyone is actually together is on the first night," explains co-director Garry Merry. "I really relish it, it gives the scenes a real kick," enthuses actor Sue Maund.

Also extraordinary is that New Factory shows are free and the actors give their time for nothing, which means a short intensive rehearsal period of under a fortnight.

But, as well as drawing people in, this is to make a political statement.

"Theatre has become very very expensive," says Dimond. "Even small fringe theatres are charging a lot and the whole point is that theatre should be available for everyone. This is really theatre for the masses."

For Merry, the bottom line is that the New Factory will do a show with the money that they have got and the goodwill of the performers.

In the case of this production, the company received a grant.

Most of it has gone on venue hire - the kind of spaces that they need are expensive - but they also performed the same production earlier in the year in a space that they were lent for free.

The core of the New Factory is a team of five. In addition to Dimond and Merry, there's writer-director Josh Darcy, designer Jonathan Swain and musical director Martina Schwarz.

The design also adds to the extraordinary air. Swain is on stage throughout holding up signs or creating art works as the event unfolds.

Dimond, Darcy and Merry act in the shows too. The play sees Dimond make her entrance as the only woman in Lenin's government Alexander Kollontai, Darcy as Father Gapon, grasping to come to terms with the uprising that he has started, and Merry as the writer Maxim Gorky.

The company's name pays homage to the Factory of the Eccentric Actor, shortened to FEKS, a group staging large-scale extraordinary events in St Petersburg in the early 1920s.

The New Factory was born in 1995 after Dimond read Jonathan Treitel's The Red Cabbage Cafe and knew that she had to adapt the novel for the stage.

Its premiere, where the audience were given bowls of soup in the cafe, set the pattern for future shows.

"It's quite an undertaking, really, because you might have to feed 300 people, so there's an awful lot of chopping up of vegetables for hours and hours," says Dimond, unperturbed.

"We try to have food that's appropriate to the productions.

Occasionally, you might be lucky enough to get a tot of vodka - but we can't promise that."

The second show was New Babylon 1871. Staged in 2001, it was the first political history for the company.

Inspired by a FEKS film, it charts the rise and fall of the Paris Commune.

It solidified the tradition of singing the Internationale at the end of the shows.

For New Babylon, it was a French rendition. For 1905, Russian rings out.

Lenin In London portrayed Lenin's home life in London between 1902 and 1903 as he was producing the underground revolutionary newspaper Iskra, riding his bicycle to Primrose Hill and eating ham sandwiches.

And the future? Well, we won't have to wait too long for the next production.

The company are looking to do a show next year about the 1926 General Strike, with the Internationale sung in English.

Beyond that, who knows, but I'm guessing that 2017 might be a year to mark in your diary.


- - - - -
And whilst looking for reviews I found this comment on a forum, which is a nice little review:

I've just seen a brilliant play in London about the 1905 Russian revolution put on by a group called something like the new factory of eccentric actors - anyone heard of them?

It was a big, free production with the acting taking place amongst the people coming to see the play, good old political theatre, quite inspiring in these ironic days. One of them told me they've been putting on plays for years about stuff like the paris commune and they're trying to get union support for an 80th anniversary play about the general strike. Ken Campbell was there but I don't know if he's anything to do with them.
Posted by Dave at 00:01
Email ThisBlogThis!Share to TwitterShare to FacebookShare to Pinterest
Tags: Acting, Blogfests, New Factory Of The Eccentric Actor, Reviews

I note your note.