My eleventh post for the A-to-Z Blogging Challenge, K Is For... Kommand: 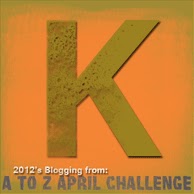 I know what you're thinking. You're thinking Command begins with a C and you would be absolutely correct. You might also be thinking that I couldn't come up with a decent K and so I borrowed liberally from C.

Almost, but not quite. 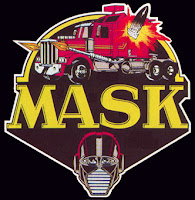 K is for Kommand, specifically (and possibly uniquely in the English language) in Mobile Armored Strike Kommand or M.A.S.K.. It was one of those toy company funded cartoon series from the 1980's, like Transformers. It featured vehicles that changed from one thing into another, like Transformers. The characters all wore masks which gave them specific special powers, unlike Transformers. 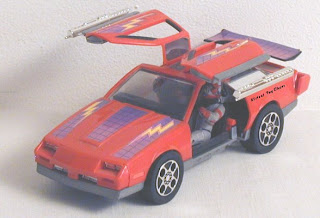 Looking back it was a very cynically marketed show in which the car was the star and therefore they showcased the toys more than the characters. I loved it. 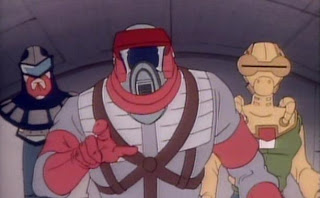 I knew that Americans spelt Armored without a U, but even as a child I doubted that Kommand was a genuine alternative spelling of Command. I don't think Webster's Dictionary would approve. Matt Trakker was clearly misleading us and our young impressionable minds. Why didn't he call his paramilitary crimefighting organisation MASC? The lyrics of the theme song included the line "Working all the time, Fighting crime, Fighting crime!", but was he more interested in branding than he was in catching his nemesis, Myles Mayhem? Here's another picture of Trakker, unmasked and potentially ashamed: 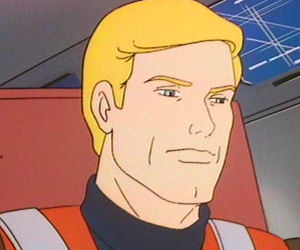 Mayhem and his paramilitary criminal organisation also wore masks and had shapechanging vehicles, but eschewed names like C.O.W.L. or V.E.I.L. and istead went for the more ideological name of VENOM, which stood for Vicious Evil Network Of Mayhem. You know where you stand with that.

I struggled to think of something to write about for my K post and while I was considering various options I kept coming back to Kommand and its misappropriated K. What I am saying in a very roundabout sort of a way is:

What is it about K's that sees them drafted in to liven up the likes of Mortal Kombat, Rice Krispies and Kwik-Fit? And does it work? What other examples of words that traditionally begin with a C also get the K treatment?
Posted by Dave at 00:01
Email ThisBlogThis!Share to TwitterShare to FacebookShare to Pinterest
Tags: Blogfests, M.A.S.K.

I vaguely remember it...

Krazy Kat and Kwik Mart! :-) And yes, i think it's an attention getter.

"Robot Chicken" had a hilarious parody of the theme song that begged the question, "Do they know command isn't spelled with a K?" An also pointed out that they're wearing helmets, not masks.

Anyway, I never owned any of these. I was more into Transformers and GI Joes.

Hi...I'm hopping over from the A to Z Challenge. Lovely blog...good luck with the challenge!

That car reminds me of the film Back to the Future

Li, but does it work?

PT Dilloway, I've never seen Robot Chicken. I'll have to check it out. Surely M.A.S.K. was the perfect blend of Transformers and GI Joe to get you interested.

Donna, hi and thanks.

Gillian, it is very DeLorean-esque, isn't it?

Regretfully I was too old in the 80s to be interested in MASK. Now I shall have to ask my children. Oops! They were too old too.

A fun K word and sounds like a fun toy. I was familiar with Rice Krispies as a kid.