My sixth post for the A to Z Blogging Challenge, F is for Free: 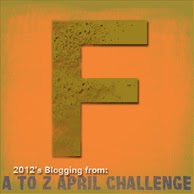 I began to hate telling people I wanted to be an actor. There was always a sharp intake of breath from whoever was receiving the bad news and then a lecture about how the path I was choosing was a difficult one. "It's a hard life" they'd say all say, presuming they were the first to say it. I'd nod gravely, hoping I looked as though I was taking it on board. Again.

People used say things like "You've got be thick-skinned" or "You need to learn to take the knockbacks". I don't know where I'd learnt it, but I was well aware that most actors were not acting all of the time and that they would have to take other work to pay the bills. I had assumed that an actor would audition for every job as yet uncast and would need to be "thick-skinned" if they didn't get anything. It never occurred to me that getting an audition in the first place would be the hard part.

The fewer auditions you have, the greater importance you place on those you do get. The more important they are, the more likely you will over-prepare, overthink and talk yourself out of the part.

As the credit began to crunch, there was a smugness in the industry that we wouldn't be too adversely affected. This turned out to be incorrect as fewer things that were commissioned, months later there was less work to go around. As there was less work every one took a step down the ladder. Movie stars did more TV, TV stars did more theatre, theatre stars took smaller parts and those of us happily getting by on the bottom rung of the ladder found themselves being stepped on.

More and more projects wanted actors to work for free. I have no problem working for free for the right project and only if everyone is in the same boat, but it was still common to pay camera, lighting and sound crew and then expect actors to work gratis.

I was cast in a short film in which I would have been the only actor. When I discovered I was also the only person not being paid, I decided not to take part. It was even implied that I should be grateful to be involved in a production made by such an expensive crew. I don't care how good the Director-of-Photography was supposed to be, if he or she calls in sick that day you can still film something. If the only actor in a film doesn't turn up, you have nothing. 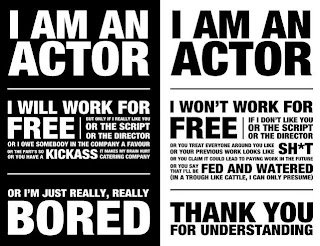 There's no doubt that the industry has contracted and I don't know what lies ahead, but when you're working there's no job like it...
Posted by Dave at 00:01
Email ThisBlogThis!Share to TwitterShare to FacebookShare to Pinterest
Tags: Acting, Blogfests

Bravo! An expensive crew, or anyone, shouldn't disrespect you.

Like you said--if everyone isn't in the same boat--then shove it!! I'm happy to hear you didn't show back up!

Jenn, there's very much an attitude that if you won't do it, someone will. Sadly, it's probably true.

Gillian, not when I'm the free stuff I haven't.