I am taking part in the A to Z Blogging Challenge. Twenty six posts over the course of the month of April all corresponding to a different letter of the alphabet. Here's the first post I have written for it and naturally enough it concerns the letter A. 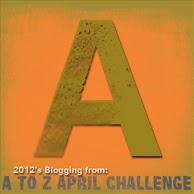 I am an actor.

I make that sound like a confession, or an introduction you might hear at Actor's Anonymous, and I don't mean to.

My father was in the Royal Air Force and before I knew what an actor was or did, I was going to follow in his footsteps and join up. We lived on RAF bases, I went to RAF schools and practically everyone I knew was involved in the RAF somehow, so I had no idea their was a life outside the Royal Air Force. When I was about seven years old, we returned from two years based in Germany and I attended non-forces school that did a school play every Christmas. I was very quickly hooked. I loved it. I became aware of actors for the first time. The people that did this for a living fascinated me. I read TV and film credits voraciously and would be able to quote tranches of certain actors CVs whenever I saw them on screen. I began recognising actor's voices in cartoons and the revelation that a few actors could voice a cast of thousands was magical to me.

I knew that I wanted to be an actor, but there was still a veil over the profession. I had no idea how one became an actor and the only references on TV were in Making Of [Insert Film Name] style documentaries/promotional material, that implied that actors were to be found in armchairs and full make-up waiting to be interviewed and that all actors worked constantly.

Sadly, that isn't the case. This is an exaggeration, but: 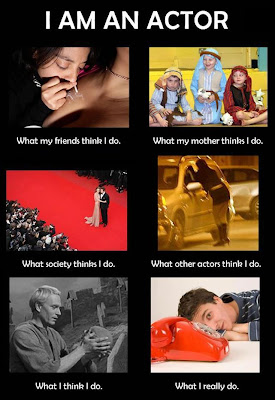 I've certainly never had more fun in a cold and drafty church hall than when I've been rehearsing a play. When you hear an audience react positively, it's intoxicating. It may very well be an addiction, but it's not one that I'm willing to seek treatment for. Maybe those periods of unemployment work like going cold turkey. It's unpredictable and unreliable, but when you are working there's no job like it...
Posted by Dave at 00:01
Email ThisBlogThis!Share to TwitterShare to FacebookShare to Pinterest
Tags: Acting, Blogfests

I'm loving the start of the challenge! Correct me if I'm wrong, but I can't see a 'Follow Blog by Email' link anywhere, and I'd very much like to follow it.

Great start, Dave. I love how you're doing what you want to do, what is right for you.

Claudia, thank you, I've added a Follow By Email thingy. Thanks.

Kittie, thanks. That's the plan, how successful it is, we'll see...

Wonderful post for the beginning of the challenge. I wish you all the luck with what you want to do.
Also good luxk with the challenge.

Thank you Yvonne, good luck to you too.

I think acting seems like so much fun, always thought I'd like to be the stuffy old librarian character actress . .. good luck with the challenge!

Sheila and David, thank you both .

Aw Dave, I wish I could give it a go.

Are you into just acting or do you have a musical side to you?

I'm a theatre-aholic and love to visit the West End musicals when funds allow, but thankfully we live near several of the larger regional theatres and can mostly pick things up when they tour and we have a small local theatre which we support on a regular basis.

The OH and I must have done something right as our offspring are theatre-savvy too (especially our daughter!) - although they've never 'trodden the boards, themselves!

I really have a lot of admiration for people who follow their dream and I wish you all success.

Will be keeping tabs to see what you get up to - never know, we might turn up in one of your audiences! ;-)

SueH I refuse to go quietly!

Ha! I love your pictures - they tell the whole story, don't they? It would be good to do a series for a writer. Good luck with the A-Z

Gillian, I'm sure you could.

Sue H, I did a few musicals at school, but I haven't really kept up the singing since. I'd give it a go though.

Theatre-aholism is a condition I hope they never cure, especially at a local level. I'm glad to hear it's hereditary.

Susan Roebuck, I can't claim to have made it myself, but it's more accurate than I'd like to admit. Thank you.

These are impressive articles. Keep up the sunny handiwork.

Amazing article. I desire you up-to-date your blog significantly more often, I just cannot seem to be to acquire adequate of your blog. I preserved your blog in my bookmarks. Would it be feasible to do a guest post sometime?…