The tenth post for the A-to-Z Blogging Challenge, J Is For... Just A Chat 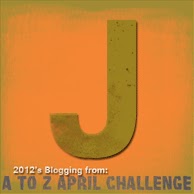 I forget what I wrote this very short story for. When I rediscovered it, I realised that I had used the title Parked before. I'm obviously more fond of it than I realised.

Anyway here it is:

She said he was a good listener, but that probably just meant he didn't interrupt. He stared out over the pond and at the rest of the park. The sun lit up his face. She was sat on the bench facing in the same direction, but the view of the park seemed lost on her. Instead she was looking down into the bulging right hand pocket on the dark green coat she was wearing. The coat was too large for her and the weather was warming up. She might regret wearing it later and said as much. She pulled a plastic bag out of the pocket and began struggling with the knot at its mouth. Her train of thought was momentarily derailed until she gained entry and then she began again, picking up where she left off as she scattered handfuls of breadcrumbs at her feet.

Maybe she was talking to the ducks that gathered around her as she shared the contents of the bag. She talked of people and places she had mentioned before. Her stories detailed the exploits of her children and their children, her neighbours and their children and even people she had seen on television whose names she couldn't remember. She said it didn't count as gossip if she told him.

He didn't have an opinion on the matter.

The ducks gobbled about her feet and vied with each other to be the closest to the next handful. Eventually the supply of breadcrumbs ran out and the ducks moved off awkwardly. She regarded him briefly, but for the most part she didn't look at him. She talked about her feelings, her worries, and constantly, her ailments. She was content to tell him anything and everything.

She stood and folded the bag in half, and then in half again. She slid it into the pocket of her jacket and patted the outside absentmindedly. She said her farewells and promised to return next week at the same time. She plunged her hands into her pockets and walked around the pond. She shivered as the wind picked up. Maybe this coat wasn't such a bad idea in the end. She looked him in the eye before turning and walking off into the distance.

He remained silent, which was to be expected. He was after all, just a statue.
Posted by Dave at 00:01
Email ThisBlogThis!Share to TwitterShare to FacebookShare to Pinterest
Tags: Blogfests, Writing

Nice short! I felt her loneliness and maybe even a touch of alienation.

it is a very interesting and informative article. I think I will add your site to my favorites.