The Random Adventures Of Brandon Generator

I came late to the party with The Random Adventures Of Brandon Generator, the "crowd-sourced animated" from Edgar Wright and Tommy Lee Edwards (among others).

I was vaguely aware of the name, but the first three episodes passed by whilst I was in a haze of teaching and broken computers.

An advert on late night TV reminded me of Brandon's existence and so I sought out the Brandon Generator website to catch up. The story so far concerned a writer, his addiction to coffee and the flights of fancy that prevented him from writing. That description doesn't do it justice and you should probably watch it instead. 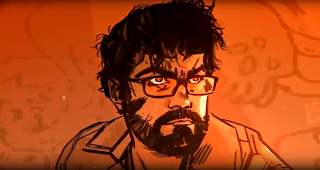 The fourth episode was to be the finale and the call was out for people to write the denouement as either Brandon's escape or Brandon's demise. I decided to hedge my bets and write one of each. I'll see if I can find what I actually wrote and I'll post it up here.

Some of my contribution(s) made it into the final episode and ninety-five other people and I got our names up in pixels. Here are the credits with my name slang bang in the middle: 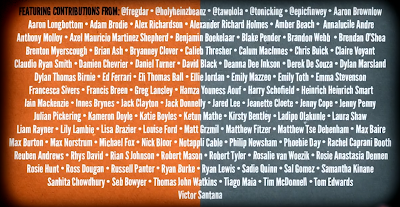 You can go here to watch the whole thing, or just episode four here.
Posted by Dave at 10:00
Email ThisBlogThis!Share to TwitterShare to FacebookShare to Pinterest
Tags: Brandon Generator, Writing

Cool you were involved in the project!

Dave that's pretty funny stuff. I'd never heard of it before.

Thanks Gina and Maurice.