I'd Rather Have A Bowl Of Odo Pops

After Frosted Frakes made its way across the internet, The Geek Twins have posted something today about the recent Star Trek breakfast cereals meme phenomenon. 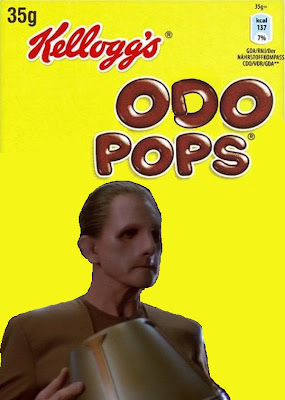 Odo's story was in many ways at the core of DS9 charting his journey from being the only one of his kind to finding his race and then losing them again, to fall in love, winning a war only to lose the woman of his dreams to save his species. I can only hope that when Rene Auberjonois was crafting a character as complex as Odo, that he also wanted his face on a cereal box.
Posted by Dave at 10:00
Email ThisBlogThis!Share to TwitterShare to FacebookShare to Pinterest
Tags: I Drew This, Star Trek

Dave, yours is just as good if not better than the others!

Sounds like someone should create a "blogfest" or "blog hop" for this topic.

Anyway, Odo was one of my favorite characters on the show. The interplay between him and Quark really helped to liven up the show.

PT Dilloway, Odo was one of my favorite characters as well.

Maurice, Odo's pretty soggy every 16 hours or so, milk or no milk.

Tony Laplume, nice reference. I tried to find a clip of that scene on YouTube to no avail.