The Miracles Of Marta Manole, Excerpt 5 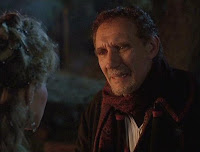 This scene of an old Romany gypsy man talking to an outsider, a Gâzo, taking a census was the first thing I wrote for The Miracles Of Marta Manole.

I named the gypsy Kazann after Zitto Kazann, the actor who played the Romanian gypsy in Buffy and Angel (above). In lieu of a name I called the census-taker Census.

I wasn't particularly disappointed when it didn't get used, but it was probably a very useful writing exercise. Either way, here it is:

Enter Census, a government man with a clipboard; he nervously attempts to approach several people on the bustling stage, but with no success then he spies an old man, Kazann, sat down in the middle of hustle and the bustle.

Census: Excuse me sir, I'd just like to ask you a few questions.
Kazann: Nothing just about them, son.
Census: I beg your pardon?
Kazann: Oh, they may be merely questions, but you can rest assured they are not just.
Census: If I could take your name?
Kazann: No. I want to keep it. You want to take my name, the more lists you can put it on, the less claim I have to it. Somewhere down the line you'll swap it for a number.
Census: A number?
Kazann: Yes, you know, for insurance, or healthcare or whatever.
Census: Oh, but it's only for identification.
Kazann: We don't want to be identified. Not by men with big smiles and clipboards, not by men with big smiles and semi-automatic weaponry. That's where all those dusty lists make another appearance.
Census: Oh?
Kazann: It's easy to lose track of them. If your name is on one, you see a pretty nurse, she checks your pulse. If your name is on another you get a rifle butt to the face and find yourself doing hard labour.
Census: But I can assure you that this list will only be used for the good of the people on it.
Kazann: An assurance from a man who is desperate to keep a job given to him by a government. Governments are fleeting; sometimes they change very quickly. A list of humble peasants with gout becomes a list of vermin to be shipped out.

Kazann: I do have a date of birth.

Kazann: But I have no idea when it was, and this will scare you (he whispers) I don't care.
Census: But surely the day you were born is important?
Kazann: Of course it's important.

Kazann: But only for twenty-four hours. Do you know what 'Carpe Diem' means?
Census: Yes, it means-
Kazann: It means: 'Seize the fish'.
Census: No, it-
Kazann: Because the fish moves quickly, the fisherman must pounce when he sees it, he doesn't wait and see. He pounces. And then do you know what happens?
Census: He catches the fish?
Kazann: Hardly ever! The fisherman goes home to his wife safe in the knowledge that she will shout at him, but that he tried.
Census: And the fish?
Kazann: Swims to another pool and lives a little longer.
Census: Wait, are you the fisherman or the fish?
Kazann: Yes.
Posted by Dave at 10:00
Email ThisBlogThis!Share to TwitterShare to FacebookShare to Pinterest
Tags: Angel, Buffy, The Miracles Of Marta Manole, Writing

Good scene. New follower here. I'm getting a head start on visiting my fellow "A to Z"ers. I look forward to visiting again!