The Miracles Of Marta Manole, Excerpt 1

Mitke's wife was mentioned in the Camden People's Theatre version of the show, but did not appear as a fully fledged character. The simple brief for this scene was to introduce her. I don't think I came up with the name Hatzidah, but I really like it. The scenes also needed to illustrate her character very quickly and give an insight into her marriage to Mitke without simply being exposition.

Gabor Pitoyli was Mitke's crooked employer and played by a different actor each time he appeared. The photo to the left is myself pulling terrible faces in the part. The cheeky stage direction when he enters here is because in this scene Gabor was played by the petite Nikki Bozdogan. I don't think she minded it, although I doubt I'd make such a comment now. Sadly I don't have a photo of Nikki as Pitoyli.

This is the first scene I wrote that made it into the show and looking back at this script years later, I think it did the job:

Hatzidah: What have you done today?

The plank is removed.

Hatzidah: Nothing.
Mitke: Why do you do that?
Hatzidah: Do what?
Mitke: Ask me a question and then answer it before I can.

Mitke: Either you aren't interested in the answer, in which case: why ask the question?

Mitke: Or my answer is never good enough, so you make up your own, so: why ask me at all? 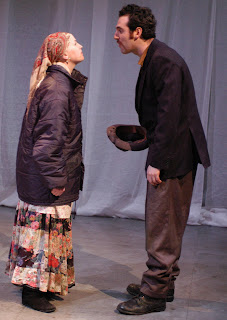 Hatzidah: All right dear, what have you done today?
Mitke: Nothing.

Gabor: Nothing.
Mitke: Sorry?
Gabor: You haven't brought me nothing all week.
Mitke (nervously): Well, it's been a slow week.
Gabor: Slow? Need I remind you of what happens to people who disappoint me? Like rent collectors who don‘t collect rent.
Mitke: No.
Gabor: Don't be a disappointment.
Mitke: No, Mister Pitoyli.
Gabor: If you can scare them half as much as I scare you, then we'll be in business. 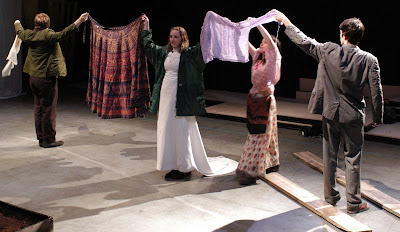 Posted by Dave at 10:00
Email ThisBlogThis!Share to TwitterShare to FacebookShare to Pinterest
Tags: The Miracles Of Marta Manole, Writing