As we've established my name isn't really David Black. With there already being a David Williams in Equity I was required to come up with an alternative. It's a very strange thing to be asked to do. I decided I would keep my first name, since I didn't trust myself not to forget what I'd replaced it with at a crucial moment. Theatres and film sets are potentially dangerous places and you don't want any confusion that when they mean you, you know what they'll shout.

The problem with David is that when you pair it with a recognisable surname you can think of a corresponding actor. Equity ask for three choices and I cannot remember what my other two choices were, but when I discovered that David Black was unclaimed. David Black it was.

It varies from country to country, but David Black is the name of the victim in certain editions of Cluedo. See that X in the middle of the board? 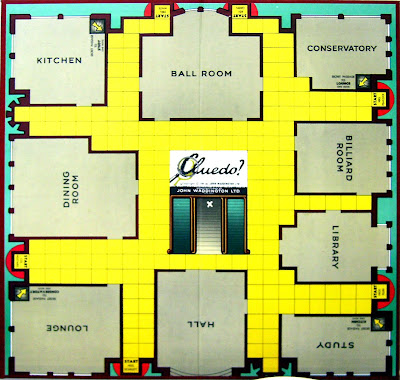 Apparently there are 2035 David Blacks in the USA.

Four Davids Black are sportsman: a Canadian American footballer, a Port Vale centre forward, a Scottish international football player and a baseball player. Others include an Australian historian, a Canadian newspaper publisher, a South African-born Scottish poet, the producer of Law & Order, a cinematographer, a special effects technician, an actor who played the US President in X-Men and someone who is thanked in the credits of Full Frontal.

It was also chosen by the American singer David Blatt as a stage name for a time. He is better known as Jay Black but oddly he adopted the name David Black when he replaced Jay Traynor in Jay And The Americans. Departing singer Jay Traynor went on to tour with Jay Siegel And The Tokens.
Posted by Dave at 10:00
Email ThisBlogThis!Share to TwitterShare to FacebookShare to Pinterest
Tags: Acting, Cluedo