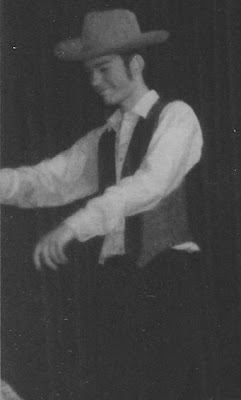 And here I am looking like a puppet of Woody from Toy Story.

The year after Kiss Me Kate we went from staging one play a year to three. The first was Oklahoma! and it is, to date, the last musical I've been involved with.

I played Will Parker opposite two different Ado Annies, Ros and Cat, which was great for me because I got twice the rehearsal.

During one show my mind went completely blank during one scene, and to the horror of Ros, instead of saying my line I launched into the first line of 'All 'Er Nuthin' long before the orchestra were expecting it. The musical director was not pleased.

Will Parker's solo effort is 'Kansas City'. The choreographer, Ann, came up with a tap dance routine for it. I had never tap danced before and I have never tap danced since, but I think I got away with it. I'm reliably informed that it ended with my asking Aunt Eller, played by Eleonore Mills to dance. It's not surprising that I needed to be reminded since apparently I regularly forgot to instigate it. Quite what filled the void I was leaving, I've no idea. Ann's notes for the dance routine are below. Looking at it now I can't quite believe I ever did it. 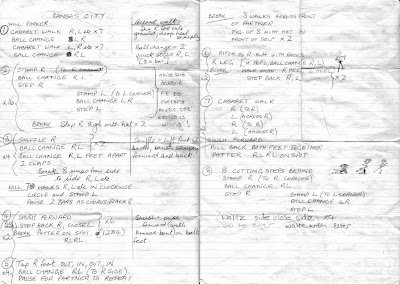 For some reason I'm both hatless and wearing very conspicuous and incongruous trainers in the photo below.

And here are a couple of reviews:

WHATS ON IN WANTAGE
Reviewer: Harold Brew
May 2000

Oklahoma was the first of the new American musicals to come to London after the end of the last War. War weary audiences at Drury Lane theatre were stunned by the show's youthful vigour and tunefulness. Rodgers and Hammerstein at their very best. Britain's situation has changed but King Alfred's School continues the tradition of a first class entertainment for the Town with this production.

The play captivates the audience from the first note. The male lead, Curly, has a peach of a part with his first song starting off-stage. Alec Richardson brought an intriguing, impish interpretation with his fine singing and stage presence.
Sub-leads were cast cleverly, Ros Harries and Catherine Millard sharing the comedienne Ado Annie with not a ringlet between them. Her partner Will Parker (David Williams) underplayed well opposite this female handful. Aunt Eller (Eleonore Mills) was perfectly made up as an old woman. (Is she really a student?). Here we saw mature acting and ability to hold the show together. The words can suffer when achieving an American accent. Juds (sic) Fry (Stuart May) was not helped by nervousness but has a singing voice worth attention. Smaller parts Ali Haki (sic)(Robert Tidbury) and Carnes (Venura Perera) were filled with humour. As for Laurey (Clare O'Donnell) - season King Alfred watchers have been awaiting Miss O'Donnell for some years and were not disappointed. She was splendid in every way, singing, acting, stage craft, looks and must be welcomed at any professional audition if that is what she wants to do. But no voice should be pushed beyond its natural limit. Ann Robson devised choreography to suit actors with little dance experience. David Williams' Kansas City and a stage full of pretty dresses in Many a New Day will long be remembered.

A mature orchestra under Jane Cockerill enriched the show.

The Modern, comprehensive, co-educational King Alfred's inspires loyalty in it's teachers even more than the old grammar school. It is to a group of assistant staff, who in many cases have given much of their professional lives to the school that we must pay tribute for producing, out of normal hours, a bench mark in extra curricular activities - the annual musical at KAs. 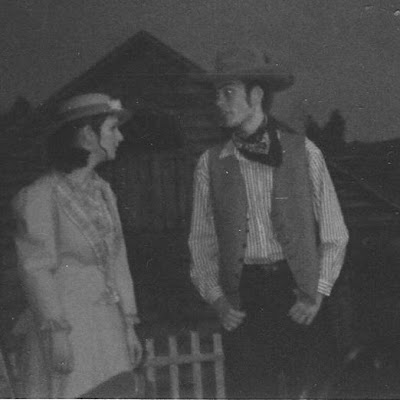 We Bid A Persian Goodbye To Oklahoma!
Last month saw the performance of the latest school performance of 'Oklahoma!' For those of you who are fortunate enough to not know the play, it is set in the deep south of America at the beginning of the century. A story of stubborn lovers, a jealous farmhand and which ends with the three-marriage scenario and the death of Jud Fry (the afore-mentioned farmhand). Against these odds the cast, headed by members of both the lower and upper sixth put on a performance well worth watching, if only to see David Williams as the spitting image of Woody from Toy Story. Clare O'Donnell and Alec Richardson as the lead roles did a fantastic job. These two were supported by Ros Harries (played by Catherine Millard during the matinee performance) and David Williams as the two comical lovers of the piece. The other leads were played by Claire Bateman (with her amazing laugh), Robert Tidbury (proving the true comedy value of stick-on facial hair) and Eleonore Mills exercising her authority as the formidable Aunt Eller. Robert, as the ill-fated in-love Ali Hackim (sic), stole the limelight in most of the scenes. The orchestra were as professional as ever, with the backstage crew working hard and succeeding to prevent any costume, set or technical crises! The entire production team produced another top-class event; the hard work certainly paid off.

It seemed a pity that with the talent the school possesses it chose to produce a play that needed a significant number of male characters. The supposed 'male' chorus behind David in his brilliant tap-dancing routine was nearly ninety-nine per cent female. Perhaps a serious rethink of the choice of the school production would see the boys flocking back to the stage, certainly something a little more modern would be welcomed. (Any suggestions of suitable modern productions of which the copyright is available to buy - ed). Despite these drawbacks, they played to full houses practically every night and everyone involved deserves to be congratulated for the amount of work they put in. Perhaps in some cases a little too much was put in as at the cast party, many proved that they really were girls "who can't say no"!

Posted by Dave at 10:00
Email ThisBlogThis!Share to TwitterShare to FacebookShare to Pinterest
Tags: Acting, Reviews