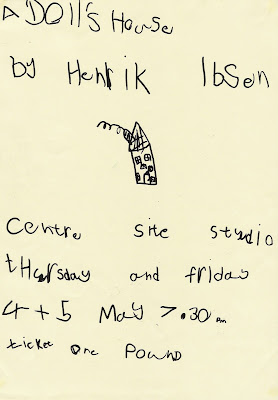 The third and final show that year was also one of the set texts for those of us taking A-Level Theatre Studies. What better way to study a play than to stage it?

A Doll's House is most famous for giving theatre the seminal character of Nora. The part was split into two and shared by Clare O'Donnell and Melody Strange. Despite a similar workload Nick Brewer played Torvald Helmer solo. I played Nils Krogstad, once again opposite Cat Millard, as Christine Linde.

Romy Thomas the director wanted to insert a kiss between Nils and Christine into a scene. A teacher getting two teenage pupils to kiss is awkward enough, but describing the quality of a kiss in detail and at great length as if to two people who had never even heard of the practice was excruciating. To be more thorough would have required diagrams. After a while Clare broke the tension and said "They have done this before". I suggested we just get on with it in as non-chalant a voice as I could muster. We did the scene, we did the kiss and then there was a lengthy silence. Ending it, Mrs Thomas just said "That. Do that". So we did.

With some excellent forward planning Mrs Thomas also bore us two children to play the Helmers young infants. As you can see we also got them to draw the posters and programmes. At least if we were breaking child labour rules, we were breaking them in the name of theatre. 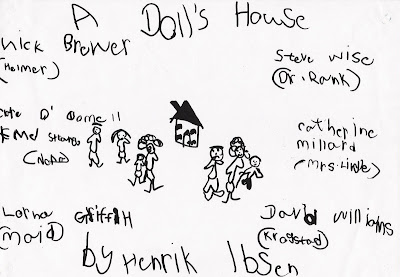