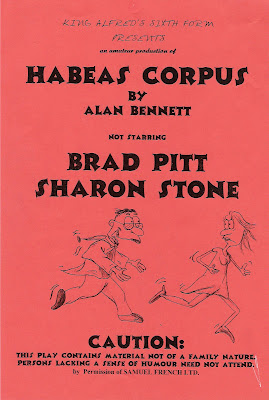 In the wake of Oklahoma! Richard Hypher, one of the school's teachers invited a group of us to a clandestine meeting, where he revealed he wanted to stage Alan Bennett's Habeas Corpus and hot on the heels of the last show we all agreed.

I was really looking forward to this show partly because I was still on a bit of a high from the last one, but mostly beause it wasn't a musical and a not-musical comedy at that.

There were no auditions, we were simply cast from Mr Hypher's observations of us during Oklahoman rehearsals. I played Dennis, Dr. Arthur Wicksteed's hypochondriac son.

I seem to remember rehearsals were a lot of fun and all started with The Kinks 'Sunny Afternoon'. When we opened everybody knew their lines but nobody knew that they knew their lines. As a result every performance featured a huddle around the props table as everybody read up on the beginning of the next scene. 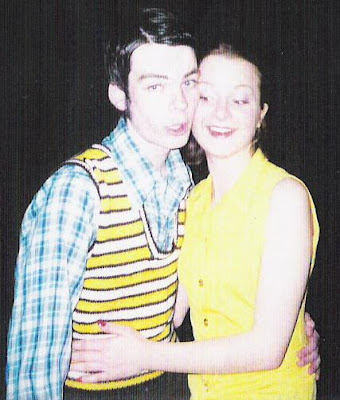 Dennis was a great part but I probably went overboard with his feebleness and I can't remember a single line of his. Wicksteed's final monologue on the other hand has stayed with me for years and is still some of my favourite theatre dialogue:

"Dying you'll grieve for what you didn't do. The young are not the innocent, the old are not the wise;
unless you've proved it for yourselves, morality is lies.
So this is my prescription: grab any chance you get
Because if you take it or you leave it, you end up with regret."

Habeas Corpus led me to read my way through Bennett's other plays and my finding the part of the aged Headmaster in Forty Years On irresistable as my exam piece. We performed our various monologues and group pieces for an audience ahead of the exam. The headmaster's speech was a big hit and got some impressive laughs. Then when the exam arrived we performed our various pieces again for the same audience plus one examiner and there were no laughs. Not a one. Undeterred I decided to use the speech for drama school auditions thinking it showed my range or some such pretentiousness. To my surprise at auditions for drama school it as expected that you perform a piece which fits your casting. Needless to say I did not get in.

We had a lot of fun working on this show. I don't know if Mr Hypher directed any other plays after we left, but I hope he did. 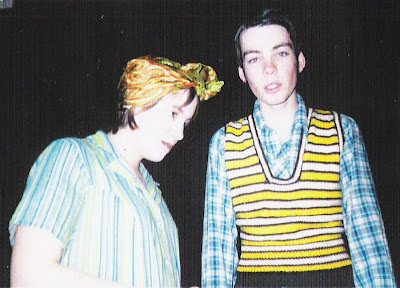 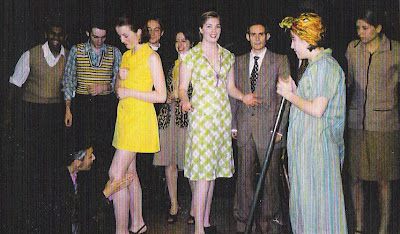 Love, Lust And A Lovely Bust
Last term was the Sixth Form production of Habeas Corpus by Alan Bennett. The play was under the direction of Richard Hypher and featured a cast of excellent actors from the upper and lower sixth - Nick Brewer, Charlie Brockliss, Clare O’Donnell, David Williams, Alex Lewcock, Lizzy Suffling, Mel Strange, David Croft, Ellie Mills, Venura Perera, and Daniel Jezzard. The rehearsals were challenging but also hilarious as the actors attempted to shorten the hesitation when it comes to the passionate kissing, as well as their unsuccessful attempts to seduce each other (especially that of Nick and Clare).
Habeas Corpus is the tale of mistaken identities and sexual encounters in Brighton’s Hove, and contains more sexual innuendo than one can handle. The production was a ‘must see’ and will hopefully be worthy parallel of the recent production to the Oklahoma. Congratulations to all those involved. It will surely encourage a greater number of people to be involved in next year's production.

* The eagle-eyed amongst you might have noticed the similarity of the name of the reviewer and that of the star of the show, Mr Nick Brewer.