I started a run of posts on the Twelve Days Of Christmas in December 2008. The first, second, third, fourth, fifth and sixth, ninth and eleventh were nothing particularly special, but I was quite pleased with the first two posts of January 2009.

The tenth day's post was pretty good when written, but went up the day after Matt Smith was announced as the Eleventh Doctor, which was less than topical on my part. It was all essentially a long run up to the twelfth day's post which I was far more proud of. It entitled me to use the same photo of Pulp's drummer Nick Banks twelve times and there are so few opportunities to make maths funny. 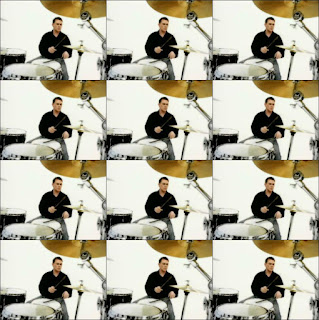 I discovered that I could 'schedule' post decades before they were written, which inspired a Life On Mars-style post and a diary entry from 1973.

I liked the posts on New Year's Resolutions and Yellow Alert, which is presumably a reference to the widely-mocked US Homeland Security Advisory System, which assigned a colour to the potential risk of terrorist attack. I don't remember what event, or lack thereof, might have caused them to change the colour.

The blog reached 250 posts this month which is by now is pretty unremarkable, but it did lead to my learning the word: semiquincentennial.
Posted by Dave at 10:00
Email ThisBlogThis!Share to TwitterShare to FacebookShare to Pinterest
Tags: Carruthers, Doctor Who, Life On Mars, Pulp, Writing