So Now You're Back, From Outer Space

It's been three and a half years since the Boys from the Dwarf went Back To Earth, but now the wait is nearly over and the SF Comedy TV series that taught me roman numerals is back with Series X.

I am very excited. 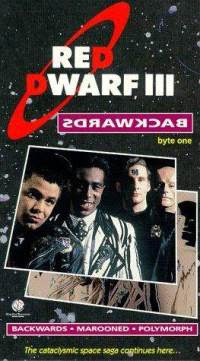 I got into Red Dwarf after seeing a video at my friend Greg's house. For the record we watched his elder brother, Peter's copy of Byte One of Red Dwarf III. The bytes were BBC Video's pseudo sci-fi way of releasing a six episode series in two halves. We watched Backwards, Marooned and Polymorph.

I had to see more and over the next few months Greg and I watched Red Dwarfs II, IV and I.

I was obsessed. I still am. I asked for the Red Dwarf novels for my birthday and I got the first one, but I found out later that my mother had made my father read it for suitability. I think he quite enjoyed it. It was deemed suitable, possibly in spite of my mother's wishes, rather than because of them.

Now I could immerse myself in this world: Your Death And How To Cope With It, drugs that make you think you're God and computer games that kill you. It was heady stuff. Bleaker than the show was on TV, but with the same great characters and some brilliantly crafted jokes.

My father bought me the next book, Better Than Life and I'm pretty sure he borrowed it after I'd read it. My pocket money would stretch far enough for me to be able to buy the Red Dwarf Smegazine, a magazine/comic filled with things an eleven year old probably isn't supposed to see.

I was probably never more excited about Red Dwarf than when I was watching Series VI go out on first broadcast. I'd seen older episodes and they'd been brand-spanking new to me, but being able to put the video on (at Greg's brother's earliest convenience) and indeed watch them again and again, meant that as much as I loved them they became familiar. Watching Series VI was so new that nobody else had seen it. I was bang up to date. This was a new frontier. Red Dwarf was back, but Red Dwarf itself was gone. No big red ship and no Holly. Just the four main characters at close quarters on Starbug. As much as I liked the small rouge one and Holly, I loved Starbug. 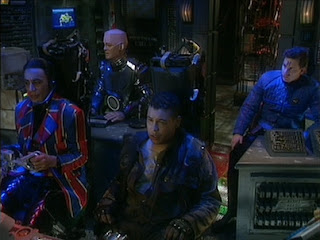 Another six episodes of big ideas and big laughs. I loved the anatomical punctuation of Psirens. I was utterly enthralled by the concept of Legion's gestalt mind. Gunmen Of The Apocalypse was something that seemed impossible to an eleven year old: a western worth watching. I loved the return of the Polymorph, Ace Rimmer and Duane Dibbley. I loved that the population of Rimmerworld turned on the original and the sight gag of just how much it worried him. The visit to 1421, the morale officer's meeting, the future Starbug, Lister's jar and that cliffhanger ending were all fantastic. I can still remember my father's impressively frank answer to the question "Dad, what's a brothel?" during Psirens. Series VI is still my favourite (well so far, we'll see what X has to offer), I really felt that I knew these characters. They were like those slightly older friends you look up to and in some cases you shouldn't. If they were real my mother would probably have thought I had fallen in with a bad crowd. Indeed I had, but thankfully for me, mine were fictional.

The transmission of Series VII and VIII were smaller events in my life and I definitely missed some episodes along the way, catching up with them years later on DVD. Against all odds, Back To Earth came along in 2009 and parts two and three felt like they were back at their best.

Red Dwarf X begins tonight at 9pm in the UK, on a channel aptly named Dave. I've managed to stay largely clear of spoilers. Now I feel like it's 1993 again and I'm legging it back from Sea Scouts to see my friends. 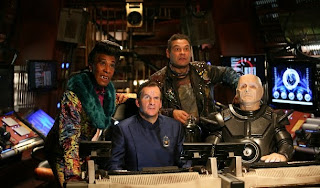 For the record, my Dad's definition of a brothel was "a place where prostitutes live."
Posted by Dave at 10:00
Email ThisBlogThis!Share to TwitterShare to FacebookShare to Pinterest
Tags: Red Dwarf

I really appreciate what you post. You have a new subscriber now.