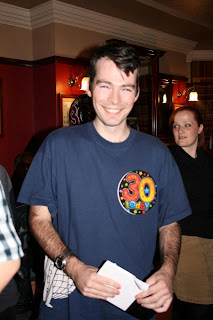 This time last year I met up with my sister and we went for a meal. It was her treat. Then we went to a pub to meet my girlfriend. She was standing outside and lead me inside to be greeted by a group of friends and family. It took longer than you might think to realise that I was the lucky recipient of a surprise birthday party.

I had no idea and had clearly been deceived by many of my nearest and dearest. I couldn't have been happier.

I had a great night. It was a slightly bizarre experience to see people from very different groups of friends mixing and getting along so well. Actors, schoolfriends, Uni friends and parents all socialising. People whose only connection was me, talking as if they had known each other for years. 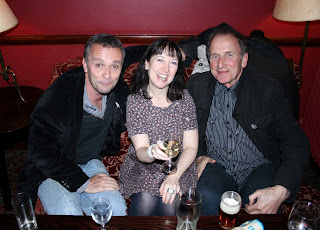 The night just kept getting better as more people arrived and I was absolutely flabberghasted as a group came all the way from Oxford. 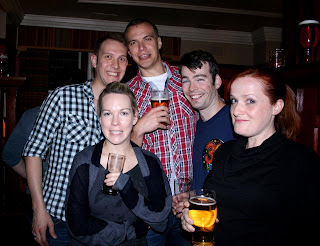 I found myself walking from group to group. Utterly bemused at what was unfolding around me. 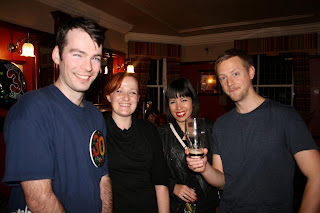 My friend Abigail gave me a balloon. When she tied it to back of my jeans I didn't realise just how good a present it was. At the pub and it the streets it meant everyone knew where I was and I've since been told that I have a tendency to wander off and it was very useful, but it really came into its own the next day.

I woke up in our hotel room, a bit hungover and was unable remove the balloon from my jeans. I wasn't that bothered and decided to wear it brazenly. It was the best decision I made all day.

I went down to breakfast and after a raft of people wishing me a slightly awkward happy birthday, I sat down to eat food I wasn't certain I was ready for. I was then surrounded by a moat of hotel staff, apparently from Poland and Polynesia in equal amounts. They sang 'Happy Birthday' and I was very embarrassed. They parted and let another girl into the circle and she was carrying two slices of cheesecake with candles on. I blew out the candles and thanked them, they left very pleased with themselves. It was a lovely gesture.

Sarah came back from the breakfast buffet bit and sat down. I warned her that as my stomach was a little tender she was probably going to have to eat a lovely gesture. I love cheesecake, but it's not a hangover breakfast. Sarah wasn't exactly thrilled, but dug in so the hotel staff wouldn't feel it was all for nothing. It was toffee cheesecake. I love toffee cheesecake, it's like they knew me.

Sarah couldn't eat two slices and so she sort smushed one about to make it look like it had been tried. The dessert equivalent of hiding sprouts under your mashed potato. We left and thanked them profusely, but having been encircled and outnumbered I didn't really know who to thank and got a very bemused look from the girl filling up the orange juice who I soon realised had nothing to do with it and probably thought I was thanking so much because I thought she had grown the oranges herself or something.

We queued up to check out and everyone was wishing me a happy birthday. We checked out and with one eye on the balloon the girl behind the counter waived something on the bill and called it a birthday present. 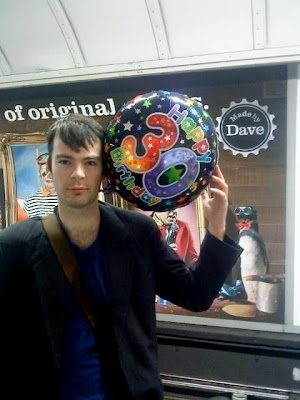 We walked out onto the streets of London and fewer people wished me anything, but scores of people smiled and some went out of their way to be nice to me.

Everyone was so nice to me that I'm considering wearing a happy birthday balloon everyday for the rest of my life. 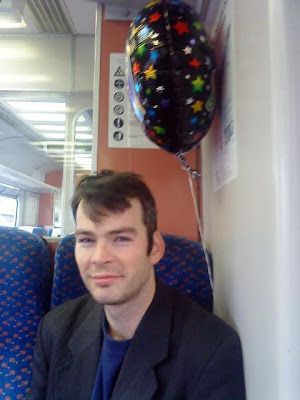 Also the helium lasted much longer than we expected and although it wasn't reaching for the sky, it still had lift for the next five weeks or so. I decided that it was still my birthday while the balloon was aloft. Best birthday so far and I can't thank everyone enough for their part in it. 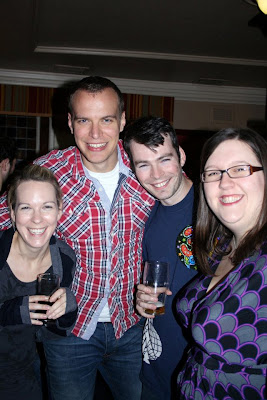 Happy Birthday! and I said that last year too... actually I am from the past telling your future self... to enjoy the day like you did before. Best of all days!

Sounds like a great birthday! Always interesting how one person can pull together such a diversity of people.
And hope today is another great birthday!

Happy happy birthday!! I hope this year is as eventful--and if no one gives you a balloon, buy yourself one! It's a brilliant idea!! :)

Happy late birthday, my friend. And I mean that word, too. It really was your birthday.

I had to work on my actual birthday this year, so I've been celebrating this weekend as well.