Sarah and I were watching The Day After, the nuclear holocaust film directed by Nicholas Meyer. It's a sort of American Threads, but it's all a bit kinder than Threads. In one of the early scenes Jason Robards' character visits a Kansas City art gallery and for a moment he looks at this painting: 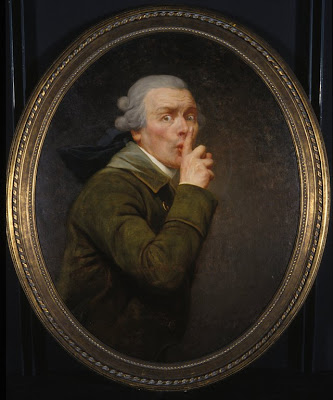 How brilliant is that?

Sarah managed to find it online. It's called Le Discret and was painted circa 1790 by the French portrait painter Joseph Ducreux (1735–1802). He worked in the court of Louis XVI and also after the French Revolution.

His less formal works are wonderful. They seem so modern and have apparently been exploited for various internet memes that seem to have passed me by.

I'm definitely a fan.
Posted by Dave at 10:00
Email ThisBlogThis!Share to TwitterShare to FacebookShare to Pinterest
Tags: Joseph Ducreux

It's a nice piece.
And Threads was much more powerful than The Day After.

That begs to be the cover of a book.

Tony, reason enough to write one.