1990 was the year that Nelson Mandela was released from prison, McDonald's opened its first restaurant in Moscow, the poll tax took effect across England and Wales, the World Health Organization removed homosexuality from its list of diseases and 'Sue', the best preserved specimen of a Tyrannosaurus Rex ever found, is discovered in South Dakota.

These are a few of my favourite things from 1990:

Alice
Woody Allen's satire on New York's bored upper class housewives and possibly substance abuse is a lot of fun. Mia Farrow is great as Alice, and Keye Luke shines as Mr Yang, her mystical herbalist. Each of Yang's potions sends Alice off in a surprising direction. Here's the trailer.

Back To The Future, Part III
Adding Western to an already impressive list of genres, the third Back To The Future has a much simpler story than its predecessors. Michael J. Fox, Christopher Lloyd and Mary Steenbergen are all great. Part III is a lot of fun. Here's the trailer.

Awakenings
Robert DeNiro, Robin Williams, Julie Kavner, Ruth Nelson and Anne Drummond are excellent in this medical drama based on a true story that is as heartbreaking as it is heartwarming. Here's the trailer.

Goodfellas
Unfairly remembered solely for Joe Pesci's delivery in the "Funny how? How am I funny?" scene. Goodfellas is a brilliant reinvention of the mobster movie in the vein of French New Wave. The actors are great across the board, but Lorraine Bracco's contribution never receives the respect it deserves. The editing and the scope of the story raise it above the competition. This is what The Godfather, Part III should have been aiming for. Here's the trailer. 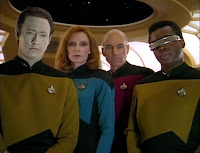 Star Trek: The Next Generation: The Defector; Déjà Q; A Matter Of Perspective; Yesterday's Enterprise; The Offspring; Sins Of The Father; Allegiance; Captain's Holiday; Tin Man; Hollow Pursuits; The Most Toys; Sarek; Ménage à Troi; The Best Of Both Worlds; Family; Brothers; Remember Me; Reunion; Future Imperfect; Final Mission
The third season continues with another Romulan Cold War allegory and James Sloyan is fantastic as The Defector. Q returns as a mortal in Déjà Q and John de Lancie, Brent Spiner and Whoopi Goldberg are wonderful. A Matter Of Perspective is an innovative use of the holodeck to tell a murder mystery. Justly deserving of its reputation Yesterday's Enterprise is fantastic, the darker alternate universe is brilliantly realised, Goldberg gives an excellent performance and Denise Crosby gets an impressive exit. Data procreates in The Offspring and Spiner and Hallie Todd are both wonderful as father and daughter. Michael Dorn, Tony Todd and Patrick Stewart are fantastic in Sins Of The Father, the episode uses the themes of classical literature and would come to define the Klingon Empire as rife with hypocritical politicking and Worf as the most honourable of men. Stewart is fantastic in Allegiance as Picard is duplicated as part of an experiment and must endure imprisonment, while the scenes with his replica aboard the Enterprise are a lot of fun. The Captain's Holiday doesn t go according to plan, but successfully shows another side of Picard. Harry Groener is wonderful in Tin Man, an episode with great visuals. Hollow Pursuits introduces the phenomenal Dwight Schultz as Barclay and his holodeck fantasies are hilarious. Spiner and Saul Rubinek are great in The Most Toys. Mark Lenard returns as Sarek and gives an outstanding performance of a man robbed of his emotional control. Ménage à Troi is a nice little comedy episode and Picard’s love poetry scene is very funny indeed. The season ends with the first half of the epic two-parter The Best Of Both Worlds which dehumanises Picard and shows Riker struggling with a dilemma like never before, but features great performances across the board, a fantastic musical score and ends with a great cliffhanger.
The second part begins the fourth season in style and Stewart, Sirtis, Spiner and Meaney are excellent as the Enterprise crew work to bring Picard back from the brink. As Picard recuperates at his childhood home, Worf's adoptive parents visit the Enterprise and Wesley gets a message from his late father, Family is a change of pace and an overt expression of the theme of the season ahead. Spiner pulls treble duty as Brothers Data and Lore are reunited with their father Dr. Soong and he is fantastic in all three roles. Remember Me is a great concept episode for Gates McFadden with unexpectedly funny scenes. Reunion develops both the storylines of the Klingon political scene and Worf's personal life brilliantly while Dorn, Suzie Plakson and Robert O'Reilly give great performances. Riker's Future Imperfect hallucinations are fascinating, the episode double bluffs the audience expertly and Jonathan Frakes is wonderful. Wesley's Final Mission is a great send off for Wil Wheaton. 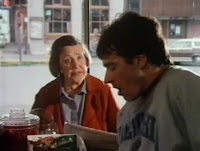 Northern Exposure: Pilot; Brains, Know-How And Native Intelligence; Soapy Sanderson; Dreams, Schemes And Putting Greens; The Russian Flu; Sex, Lies And Ed's Tapes; A Kodiak Moment; The Aurora Borealis
The first season of this off-beat American comedy drama is great straight from its pilot episode: the numbered patients, Joel's tantrum in his truck and great debuts for Rob Morrow, Barry Corbin, Janine Turner, John Cullum, Darren E. Burrows, Peg Philips and Elaine Miles. John Corbett is fantastic as DJ Chris in Brains, Know-How And Native Intelligence, Joel and Ed's "which witch?" conversation is hilarious and Maurice's stint as replacement DJ is great. Soapy Sanderson's last will and testament, Ed's time working as documentary crew and Cynthia Geary's vox pop interview are great. Dreams, Schemes and Putting Greens is worth watching for Maurice's song alone. Joel's girlfriend descends on Cicely at the same time as The Russian Flu and the dream sequences are fantastic. Ed's daydreams inspired by Indiana Jones, Midnight Cowboy and Westerns are brilliantly shot in Sex, Lies and Ed's Tapes. All three storylines in A Kodiak Moment are great. The Aurora Borealis lights up the sky as Chris' 'twin' Bernard arrives in town and all their scenes together are fantastic.

Diggers by Terry Pratchett
The nomes left the store for the quarry and Diggers sees them adapting to life outside. Grimma is a fantastic lead character and her observations on life will be a joy to children with a sense of humour, but I read this as an adult and loved it.

Wings by Terry Pratchett
Running parallel with Diggers, the third and final Nomes book follows Masklin, Gurder and Angalo across the Atlantic to Floridia, but the ensuing culture clash is greater than ever and perhaps sees them travel even further…

Red Dwarf: Better Than Life by Grant Naylor
The second Red Dwarf novel picks up after the cliffhanger ending to the first, with the crew stuck in the total immersion video game Better Than Life. As with the other Red Dwarf novels this is much more than a novelisation, but it does contain elements from the TV episodes Marooned, Polymorph, Backwards and a negative preview version of White Hole before it appeared on screen. This book is very, very funny, but also very, very dark.

Moving Pictures by Terry Pratchett
The tenth Discworld novel takes on Hollywood as Moving Pictures become the latest craze to hit Ankh-Morpork. The movie references to the likes of Predator, The Bride Of Frankenstein, Casablanca, Laddie, Gone With The Wind, King Kong and Gentlemen Prefer Blondes come thick and fast. Indeed, most of the humour comes from film parodies, but lovingly so.

Good Omens by Neil Gaiman & Terry Pratchett
"Bringing about Armageddon can be dangerous. Do not attempt it in your home." Pratchett and Gaiman's treatise on living with witchcraft, the devil and the eight Bikers of the Apocalpse in the modern day is very funny and crammed full of references to Queen, The Omen and Infamous Bibles.

Last Chance To See by Douglas Adams and Mark Cawardine
Adams and Cawardine travelled across four continents searching for a glimpse of several endangered species for a radio show. The book of their exploits delves deeply into their experiences searching for animals like the Aye-aye, Komodo Dragon, Kakapo, Mountain Gorilla, White Rhinoceros and Yangtze River Dolphin.

Doctor Who: Fellow Travellers; Darkness, Falling; Distractions
As the television series takes a break, the comics take up the slack and Andrew Cartmel's script for Fellow Travellers, great artwork from Arthur Ransom and some of the best likenesses of the Doctor and Ace combine to make a very atmospheric strip. Darkness Falling and Distractions both lay the foundations for The Mark Of Mandragora very well.

On the 15th of this month: The Nineties Blogfest
Next Month: 1989
Posted by Dave at 10:00
Email ThisBlogThis!Share to TwitterShare to FacebookShare to Pinterest
Tags: Back To The Future, Discworld, Doctor Who, Monkey Island, Northern Exposure, Red Dwarf, Star Trek, These Are A Few Of My Favourite Things

Absolutely. It was one of my favourite things from 1995.

Awakenings is a great movie. 1990 was a great year for The Next Generation, too! And the release of Good Omens!

The Next Generation had hit its stride by that time!

1990 was a great year alright. I had gotten into Red Dwarf after the show was off the air, but I remember everything else. Good times.

Looking forward to the 1990s retrospective. I predict you will find my selections predictable. Also, I wish there were synonyms for "predict" that wouldn't make me sound like a prat.

Tony, I think Awakenings is an all too overlooked classic.

Alex, The Best Of Both Worlds was a definite watershed, wasn't it?

Phil, I predict that I will probably be unable to predict your selections. I think you're right, we need a more casual term for prophecy and soothsaying.

Wow! I guess I was even more out of touch than I thought. I've never even heard of those TV shows and some of them sound interesting. I did see a lot of movies during that decade, but mostly ones that my kids wanted to see. The 90's are a cultural blur to me.

Lee
Tossing It Out

Arlee, being in touch is overrated.