Budd over at Scifi Media is holding the Scare Me! Blogfest.

So here's how it works in Budd's own words:

"The purpose of the Scare Me Blogfest is to write about the scariest book that you have read, Movie you have watched, Ghosts you have encountered, and/or to share your own scary story. Just sign up on the Linky below and post your entry on Halloween. A panel that includes me, myself, and I will argue and fight to decide which entry was the best and that entry will get an award. Who knows, I may make several." 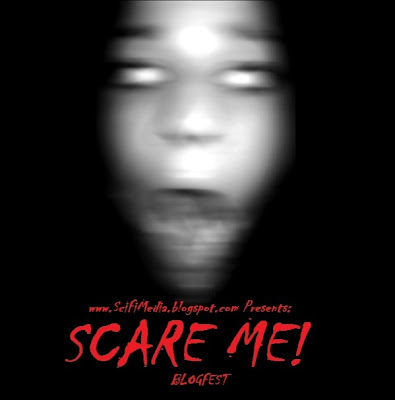 I've chosen to write about three of the scariest things I've ever seen on screen in the order I saw them. All three are British, although that wasn't deliberate.

Doctor Who: The Curse Of Fenric
This four-part 1989 Doctor Who story sees Sylvester McCoy's Doctor visit a Top Secret naval base during World War II. It borrows heavily from Norse mythology and combines it with a healthy dose of vampires to make an excellent and uneasy tale. The script, performances, monsters, location, effects and even the weather all work together to make a brilliant story. 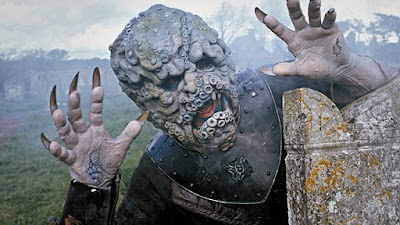 Why is it scary?: The Haemovores are vampires in all but name and have a look that would put you off your lunch, but the scariest thing about The Curse Of Fenric for me is how it deals with ideas of faith. Vampires in many stories are repelled by crucifixes. Haemovores take that idea to its logical conclusion and are repelled not by the crucifix, but by the faith of the person holding it. If you have an absolute faith in anything then you are safe. At the tender age of eight I sat down on four successive Wednesdays to be scared out of my wits by the simple idea that my own doubt could kill me. 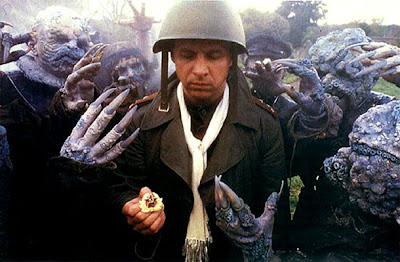 - - -
The Wicker Man
This 1973 film set in the Scottish Islands follows a policeman searching for a missing girl in a convoluted conspiracy and ritual sacrifice. The Wicker Man features Christopher Lee in drag, Britt Ekland's body double's buttocks and a truly excellent performance from Edward Woodward. 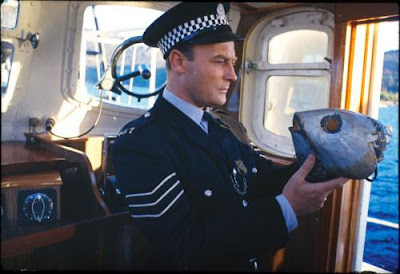 Why is it scary?: We come back to faith again and by extension certainty without the need for proof. All the characters in The Wicker Man are certain that their own beliefs are correct even in the face of overwhelming evidence to the contrary. The merry dance that the islanders lead the policeman on is all the more scary second time around. The climactic scene is terrifying and shocking. I haven't seen the remake, but the fact that someone could watch this and think they could improve on it is truly horrifying. 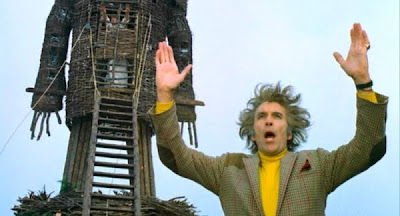 - - -
Threads
Asking what might happen if they dropped an atom bomb on Sheffield, this 1984 TV Movie is an unflinching look at a Nuclear holocaust. I was recently reminded about the severity of Threads and have ben unable to get it out of my head. 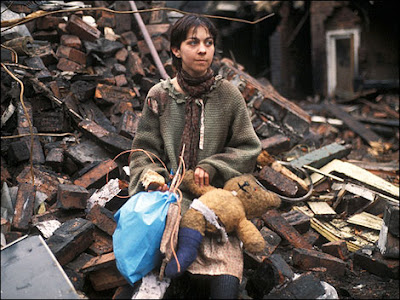 Why is it scary?: It's an unflinching look at a Nuclear holocaust. How could it not be scary? If the other two stories here examine ideas of faith, then Threads brings us full circle, but it's more like abandon hope all ye who enter. The documentary style and unrelenting plausibility of it all wears away your expectations and rather than rooting for the survivors you begin to see them as the real victims. This film is harrowing in the extreme. 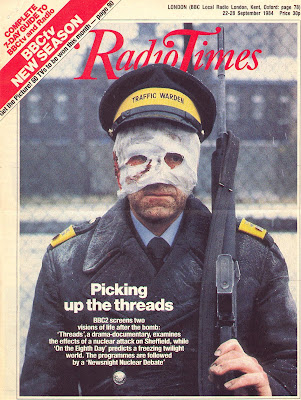 - - -
What scared you?
Posted by Dave at 00:01
Email ThisBlogThis!Share to TwitterShare to FacebookShare to Pinterest
Tags: Blogfests, Doctor Who, Threads

Threads was very bleak, but that made it effective. My entry for the blogfest goes up in a few hours.

cool, new stuff for me to check out. have never heard of threads. Thanks. Also, linky sent me to a different domain when I clicked your entry. You may want to sign up again to make sure you get the traffic.

I love Doctor Who, but I haven't seen that episode! Sounds perfectly creepy.

The original 'Wicker Man' was quite scary. I liked that you included some from television as well. I'm a real Who-vian.

Also, I wanted to let you know that the link to your website from the Scare Me Blogfest is broken. It sends folks to the wrong address. I found your page by typing it in directly.

Budd, give Threads a go. Whoops, thanks for pointing out the linky issue.

Shallee, I recommend it.

I saw the remake of The Wickerman, and they definitely failed to improve on it!

I'll check out Threads, Nuclear holocaust, yes the most frightening!

Threads was great. The US equivalent was The Day After or something, and I've never seen that. We watched Threads in 7th grade or so for a class...I think it says something that our very American teacher chose to play the British Threads over the American Day After. I assume it must have been less affecting...one in a long line of lesser copies for which our country is rightly infamous.

Threads still scares me to this day. The panic before the bombs fall sticks with me vividly...even moreso than the devastation afterward. I've only seen it once. No way could I watch it again. I don't think I slept well for weeks.

Threads does sound like a good movie. Nuclear holocaust is a very scary thought.

I haven't seen the original Wicker Man or Threads, but both sound good and disturbng. The Wicker Man remake, I'm certain, didn't do anyone any favors, and definitely couldn't be better.

Shannon at The Warrior Muse

Steampunk Princess, thanks for the heads up.

Yolanda, thanks. I think everyone should watch Threads.

Shannon, couldn't be better, you say? Oh, I see what you meant.