I almost missed this, but Alex J. Cavanaugh is asking us to list our favorite genres of Movies, Music, Books and a guilty pleasure genre from any of the three categories in his Genre Favourites Blogfest: 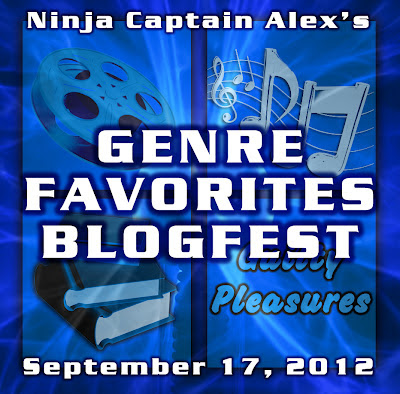 Movies
I'm a big Science-Fiction fan. The speculative "what if?" is always exciting, but in SF you can make your own rules and characters can exist somehow in a purer state as we are forced to interpret them by their own rules. I also love how malleable a genre it is. It can be combined with practically any other: Serenity is an SF Western, Star Wars is SF Fantasy, Alien is SF Horror, Aliens is SF Action, etc.

Music
I love Britpop. It's not a term that simply means pop from Britain, because that would be horrific. Instead it was a term coined the refer to the musical output of bands like Pulp, Blur, Supergrass, Cornershop, The Seahorses and Ultrasound between about 1994 and 1998. Some people call it Indie which is shorts for independent, but since it was quite mainstream at the time that doesn't really qualify either. I've largely stayed with the same bands as I've grown older.

Books
I read a lot of comic fantasy and Discworld in particular. Although I've been reading a lot of comic books lately and they've been more SF than Fantasy.

Guilty Pleasure
I don't really know about guilty pleasures, if something pleases you, then you should be honest about it, but I suppose I like the Where's Wally? books more than a thirty year old probably should.

Shameless Plug
If you enjoy blogfests, on the 15th of October I'll be holding The Nineties Blogfest here.
Posted by Dave at 00:01
Email ThisBlogThis!Share to TwitterShare to FacebookShare to Pinterest
Tags: Blogfests

Can't go wrong with science fiction movies. That's my pick as well. Where's Waldo, huh? Hey, I'm sure my guilty pleasure will make many laugh.
Thanks for participating in my blogfest!

I enjoy sci-fi, although I'm not a die-hard fan, but I really liked your explanation of why it's your favorite. It really encapsulates what great about the genre.

I enjoyed reading about your favorite genres,
Jocelyn

Britpop sounds kind of fun. I've never listened to it. Maybe I should.

intrigued about brit-rock... i probalby no more bands/groups than i know... i am wanting to find out more. thank you.

Serenity is excellent. Great list Dave and I'm in the 90s blogfest!

I think you're right. My taste in music really has'nt cahnged over the years, either.

I swear, just about everyone participating in this blogfest chose sci-fi for at least one category Just goes to show what excellent taste we all have. Nice picks!

I really like Discworld too--those are fun books! But there are so many of them I can't even begin to try to read them all.

Love me some Sci-Fi. There are always new worlds to explore and creatures to face and conquer. lol

I'll peep out your blogfest.

Nice to meet you. Hopped over for the blogfest.

You're second Actor/writer I have had to pleasure to meet. I think it's great that a person can be creative in more than one genre.

I was a model in the 80's and 90's and have acted on occasion. Actually started to enter back into the field, now that I am in shape again.

Interesting likes. I would definitely like to hear some of the Britpop. I'm sure I'd like it. I enjoy mostly all music from the 80's and 90's. I had spend a lot of time in Europe in those days, so I might have heard it.

I will definitely check out your 90's blogfest.