In 2005, I returned to London Metropolitan University after I had graduated to take part in Weave, an interdisciplinary performance that reworked elements of Macbeth and combined theatre and dance as part of The Facility.

I was initially offered the part of a servant at the royal court who announced everybody else. The actor playing King James VI of Scotland and I of England left the show and I was one of the actors asked to audition to replace him. I don't think it was judged on performance, but instead came down to Scottish accents and mine was slightly less bad. So I got the part.

Check out my massive feather: 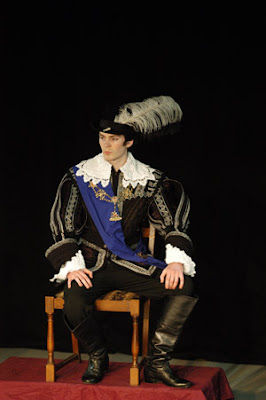 Most of the action of the play concerned a fictional witchtrial presided over by King James. He was fascinated with witchcraft and indeed wrote his own treatise on the subject in 1597 called Daemonologie.

The King's lines in Weave were almost exclusively drawn directly from Shakespeare, the Bible and Daemonologie. I'm convinced that the latter of these were never meant to be said aloud: "The fearefull aboundinge at this time in this countrie, of these detestable slaves of the Devil, the Witches or enchaunters, hath moved me..." 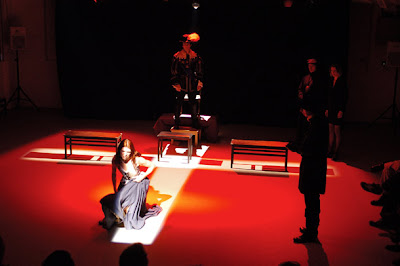 The show had lofty ambitions regarding its interdisciplinary nature and historical content, but it turned out to be a bit of a mixed bag. It was meant to be a blend of drama and dance, but the balance was less 50/50 and more 80/20 toward the scripted dialogue, which left the dancers waiting about for us to finish.

The play was set, quite arbitrarily as it turned out, in 1605 (despite proof that King James' was more sceptical about witchcraft as late as 1599), but to complicate matters somehow the witchtrial was somehow attended by a modern day feminist theorist. The logic of which was glossed over.

On the plus side, the dancers were very impressive and Michael Colgan was fantastic as the court prosecutor.
Posted by Dave at 10:00
Email ThisBlogThis!Share to TwitterShare to FacebookShare to Pinterest
Tags: Acting

That is quite a feather!

Glad you got the part. Shakespeare never disappoints.

That is some feather! Did you get to keep it?

Ellie, sadly not, it had to go back to the costumer.