Nearly three years ago I wrote this about my great-great-uncle, Arthur Linton. While Arthur was easily the most successful in the family, his brothers, Tom and Sam, were both professional cyclists as well. I've been meaning to write about both of them for some time, but I knew so little about either of them. In order to redress the balance, I've been doing a bit of research starting with Tom:

Tom Linton is pictured to the left in an advert for Dunlop, a company his great-nephew (and my father) would work for a half a century later. 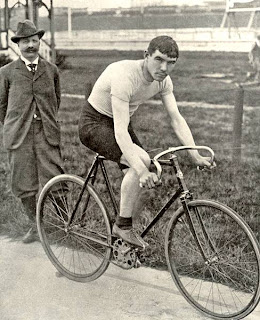 Tom Linton is following behind the 'trandem' in this photo. It's a shame that we don't see people riding trandems anymore.


Astonishingly, Toulouse-Lautrec once drew Tom as part of an abortive advertising campaign for the Simpson Bicycle Chain. Tom is in the foreground on the bike, while the figure rooting through the bag is reported to be the controversial trainer Choppy Warburton linked to a number of drugs scandals. The final design is less risky, but also somewhat less impressive. 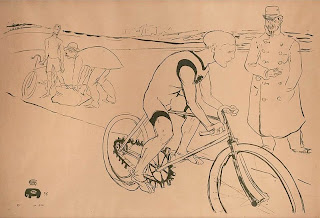 Arthur Linton was a taciturn and shy fellow who avoided talking to the press. Apparently the same cannot be said of Tom who had a very public rivalry with Jimmy Michael as seen in this from the Sporting Life in 1896: 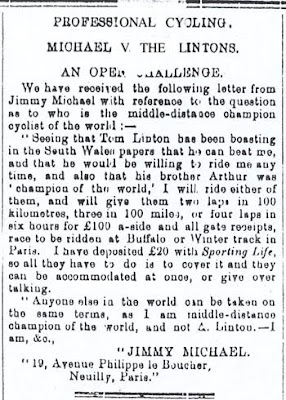 My research has been quite scattergun, but here are a number of other newspaper cuttings that I've managed to find. The Sketch, 3rd of June 1896: 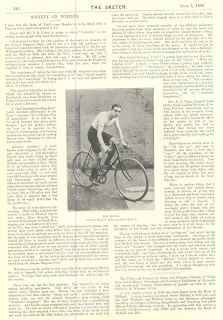 
I wish I knew a lot more about Tom Linton and his brothers.
Posted by Dave at 10:00
Email ThisBlogThis!Share to TwitterShare to FacebookShare to Pinterest

This is fascinating. Who knew cyclists back then were so exciting. Thanks for sharing Dave

Who knows how much more exciting?