The performances of The Cherry Orchard were yesterday.

We spent the fourth week hotseating characters, which proved a very fruitful exercise and proved to me that there was a good level of understanding among the cast. We then ran the whole play, followed by the first half again. Costumes were coming together and I had various meetings about lighting, music and sound.

Our fifth week was spent running the play in two halves and then in full on the Friday. Lines were still not being learnt and blocking was being forgotten.

Week six saw a crisis of confidence among the cast and so we slowed down. Working our way through the play at a pace more akin to week three. There was some really nice insight from the cast and stronger characters were definitely developing. There were still lines unlearned and if this continued there would be some harsh lessons learned as well.

This is week seven: our performance week. We had our get-in and technical rehearsal on Monday and we were supposed to have our dress rehearsal, but the cast were not ready. Many were not off-book and very few seemed bothered that the show was tomorrow. A stern talking-to was in order and the effect was obvious on the second run of the day. Things were heading in the right direction, but I was worried it would be too little, too late. I delayed the dress rehearsal from the previous Friday, to Monday and then again to the day of the show, which was hardly ideal. The dress rehearsal was a qualified shambles. Many of the scenes were fine but the transitions between them were appalling, cast members wandered off missing whole scenes and I was forced to prompt several times.

I was very anxious as the matinee performance began. Things went wrong, but the cast carried on and crucially carried on in character. They helped each other through and they adapted to the constantly-changing circumstances. The lines jumped around Act One and I was leafing through my script to try to find where they were in case I needed to prompt again. I would find a line that had just been delivered and then the next would jump back or forward two or three pages. Acts Two and Three were more straight-forward. Act Four had its line jumps, but they all went in the same direction and merely got us to the end a little quicker. I was required to prompt twice, which was unfortunate, but obviously a vast improvement over the last few runs. Having an audience forced the cast to commit to decisions, some we had discussed and some that we hadn't. The character moments that were created during the performance were fantastic. We were meant to have an interval, but the cast carried on regardless. I was a little surprised as this, but I was glad of it. It meant that the pace of the show was great and as most of our audience for the matinee were press-ganged students from other courses, it meant that we managed to retain them for the entirety of the play. There was some confusions as we changed actresses, but the jokes got laughs and the fate of Firs garnered a sympathetic "Ahhhh".

After the first show, I felt I could relax and the evening show was another improvement. There were still line jumps, but they were fewer and farther between. The cast remembered to allow for an interval. There was no need for any prompting. There were still laugh, but they fell in different places. The audience was largely made up of parents and Pishchik's lines about his mortgage got laughs that they hadn't in the afternoon. Many of the students that watched the first show stayed for the second as well, which is a favourable review in itself.

Both shows were great and I'm enormously proud of the cast for all the hard work they've put into the show, but it's a shame that they left it to the last moment to put in the effort. 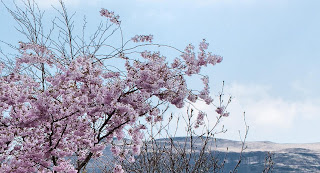 Photograph used by kind permission of Tom Holmes at http://www.jimmylemon.co.uk
Posted by Dave at 10:00
Email ThisBlogThis!Share to TwitterShare to FacebookShare to Pinterest
Tags: Directing, The Cherry Orchard

Congratulations on the success of both shows! I bet most of the audience didn't even realize something went wrong.

Thanks, I'm very proud of them. You're right, most of the audience were none the wiser.