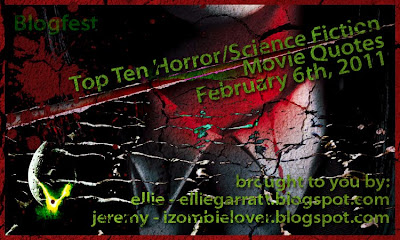 Here are ten that sprang to mind, in no particular order:

"What the hell are we supposed to use, man? Harsh language?"
Private Frost (whilst being disarmed)
Aliens


"It was a very beautiful ceremony. Lenore wrote her own vows. I cried. Like a baby. A hungry, angry baby."
Mister Universe
Serenity


"You did it beautifully!"
Lord Summerisle
The Wicker Man (I'd explain the context but if you haven't seen the film I'd be giving too much away)


"There is an old Vulcan proverb: Only Nixon could go to China."
Spock
Star Trek VI: The Undiscovered Country


"Doctor, would an ape make a human doll, that talks?"
George Taylor
Planet Of The Apes (1968)


"We're not using the Z-word!"
Ed
Shaun Of the Dead


"You, my friend, are F-U-K-T. Fucked."
Geoff Tipps
The League Of Gentlemen’s Apocalypse


"The strange thing about television is that it doesn't tell you everything. It shows you everything about life on Earth, but the true mysteries remain. Perhaps it's in the nature of television. Just waves in space."
Newton
The Man Who Fell To Earth


"I'm sure that in 1985 plutonium is available in every corner drug store, but in 1955 it's a little hard to come by."
Doc Brown
Back To The Future


"Everything in the human culture takes place below the waist."
General Thade
Planet Of The Apes (2001)
Posted by Dave at 00:01
Email ThisBlogThis!Share to TwitterShare to FacebookShare to Pinterest
Tags: Alien, Back To The Future, Blogfests, Blood And Ice Cream, Planet Of The Apes, Serenity, Star Trek, The League Of Gentlemen

I especially like the "old Vulcan proverb". Some interesting contributions. Mine will show up in a few hours.

And here I thought I'd be the only one to quote from Planet of the Apes. Cool.

OMG, an incredible list. How could I hae forgotten The Man Who Fell To Earth?

Thank you for taking part!

Love the Back to the Future quote. Completely forgot about it.

You picked out some doozies! Well done. :)

Very thoughtful list - how do you remember all those lines though? My list feels really flippant now 8-(... hang on... that's what I was going for! 8-)

Interesting mix! Serenity is on everyone's list I believe.

You, my friend, are F-U-K-T. Fucked."
Geoff Tipps
The League Of Gentlemen’s Apocalypse

I hadn't heard this one. But damn if I don't like it.

I loved seeing another of my favourite SERENITY quotes turn up.
The Planet of the Apes quotes were great.
You picked some classics. :)

Ah, that old Vulcan proverb. Planet of the Apes is classic. Over the top Charlton Heston makes that movie.

Great list! Gotta love Back To The Future and Serenity!

you just made me remember that I wanted to use "I am a leaf on the wind." OH well list made. Your is great by the way. Great spock quote.

Great list! Every time I visit a new blog it triggers so many movie memories that I'd forgotten.

Interesting list and I didn't know quite a few. Serenity was on almost everyone's list... but mine I think! I've never seen it and I don't think I've even heard of it! I must be missing out!

great list, i love the trek and and long live serenity.

Thank you for being part of this, it was a great time and success.
Jeremy [iZombie]
http://izombielover.blogspot.com/2011/02/thank-you-all-success-my-plans-out.html

I've seen Serentiy everywhere, too! You've got a great variety here. And love the BttF quote. Thanks for sharing! :)

Oh, I forgot about that great quote from Back to the Future. I am so going to have to watch that again after this blogfest :)

I had to Google a few to make sure I had them correctly.

Good stuff. You really picked some hidden gems there. Planet of the Apes 2001? Star Trek IV? Nice ones.

I'm not much of a Star Trek fan, but that's a great quote.

I'm not much of a Nixon fan.

The Nixon mask continues to be one of the top selling masks in costume shops and for Halloween. Nixon had a great face for characture.