In a play called The Death Of Tintagel it is not surprising that there are people who want to bring about his end. Unfortunately for Tintagel there are more people against him than there are on his side. His grandmother, the Queen, and her handmaidens are out to get him, but probably more sinister than that is the fact that his sister Bellangère and friend of the family Aglovale are fairly indifferent to his fate. 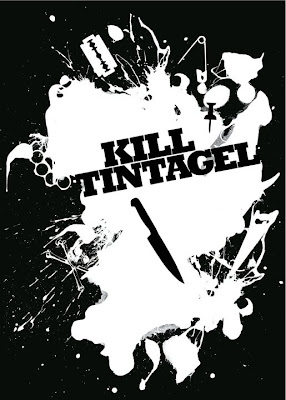 "You can tell what happens just by hearing the title."
Aglovale

In the light of the apparent popularity of a recent spot the difference contest that wasn't (sorry about that) and because Aglovale is far more interested in his crossword, than he is in Tintagel's ultimate fate. I thought that a genuine puzzle might go down quite well and possibly make up for misleading you. Apparently the first ten people to finish this win a prize that has been described as ginormous: 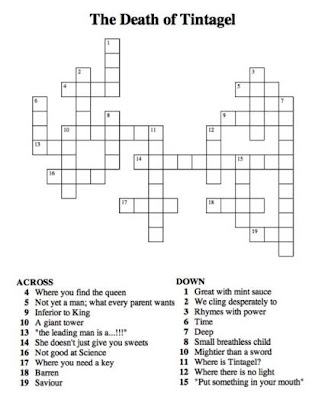 Posted by Dave at 10:00
Email ThisBlogThis!Share to TwitterShare to FacebookShare to Pinterest
Tags: Acting, The Death Of Tintagel

The Moon
shines
on a cat

As a native Swede, I am particularly proud of my love poetry suite Sonnets for Katie.

Sexuality introduces Death to Being; and indeed Life simultaneously. This is the profound Myth of the Eden. The work of the Serpent. Bringing us out of "blessed" Standstill. So, in contrast to the mindless pietism of vulgar Christianity, my personal "Christo-Satanism" should be given serious thought by the Enlightened Few, the Pneumatics, the 1% Outlaws. The Light Bringer must be rehabilitated, beacause if not, the All of it simply doesn't make sense: true Catholicism is necessarily Meta Catholicism.

My poetry in French:

My poetry in German:

And: reciprocity: for mutual benefit, you will do me a favor promoting your own blog on mine!