The Echo May Whisper

The Death Of Tintagel has been reviewed:


"Magic in the Dark Tower"
Its genesis a long-forgotten symbolist marionette piece by Maeterlinck, the man remembered perhaps only for Pelleas and Melisande (and The Blue Bird. which was eventually to emerge as a gem of Hollywood arcana), this new treatment of The Death of Tintagel by Peter Norris (sic) is a surprise and a delight, something rich and strange, compelling and cathartic.

The scenario could be written on the back of an 1894 envelope : Matriarch Queen summons home with murderous intent her grandson, Tintagel to pre-Arthurian keep ; sisters Ygraine and Bellangere can do little to save him ; the Queen's handmaidens will prevail and bear him off to death in the underworld …

And this was written for puppets? Unpromising? Not in the hands of this writer and this company.

In black box theatres, on a good day with a good play, you can hope for immediacy and atmosphere … the spectacular, maybe not. Surprise. This piece is directed (by Vik Sivalingam) and staged with economy of means and abundance of imagination (set by Nik Corrall, costumes by Charlotte Randell), including at least two transformational coups de theatre that are literally breathtaking. I can reveal the plot, but these you have to come and experience for yourself. All this was enhanced by clever and resourceful lighting (Jason Osterman), hackles-raising sound (the Chorus and Austin Spangler - loved the amplified shears!) and some beautifully-gauged music by Alejandro Pelaez.

I seem to have begun with how the thing looks and sounds, and I'll leave it that way - it is a hallmark of this production, and pretty exceptional in fringe theatre - but this is not to detract one iota from the text or the company's delivery of it. The ongoing "thing" about the speaking of verse has become a bit of a bore, I know - why do so many actors gabble classical text, these days? - but here we have new verse writing, quirky, poetical and arresting … and delivered with relish and clarity, in particular by Vera Chok (a compelling Ygraine) and Freddie Machin (engaging and poignant boy/man Tintagel). As the eunuch Aglovale, Adrian Gillot (sic) is particularly adept in understating the text, as befits his unavailing yet illuminating character, while Caroline Kilpatrick's ever-almost-lacrimose Bellangere's words rightly speak louder than her actions.

This leaves the chorus, the "handmaidens" (read Fates), whose task (apart from offing Tintagel, that is …) is to induct us into the world of the dark tower, the powers at play, the inevitable outcome and the language in which we are to hear all unfold … oh, and a few gags into the bargain. Yes, there is light relief in there, I'm glad to say, but of the kind that is wholly in keeping with the sardonic attitude of this fateful threesome, whose otherliness is beautifully expressed in both costuming and movement, the latter I would think offering more than a nod to Maeterlinck's original marionette vision. 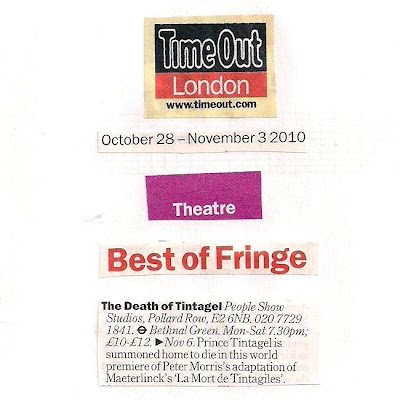 You can still buy tickets here
Posted by Dave at 10:00
Email ThisBlogThis!Share to TwitterShare to FacebookShare to Pinterest
Tags: Acting, Reviews, The Death Of Tintagel