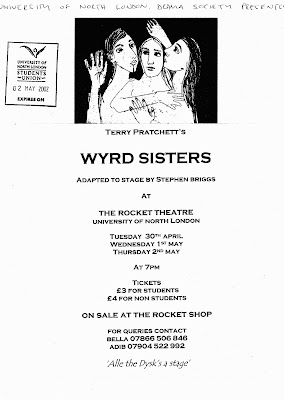 Back when London Metropolitan University was still a twinkle in an archchancellor's eye. Our half of the merger waiting to happen, the University of North London was languishing without a drama society. During our first year somebody started one and as their first effort they chose to stage Stephen Brigg's adaptation of Terry Pratchett's Wyrd Sisters.

"Actors," said Granny, witheringly. "As if the world weren't full of enough history without inventing more."

I'm a big fan of the Discworld novels and I was very excited about this choice of play. I can't remember if we auditioned but it was cast from the ranks of our course. I played Tomjon and the voice of the demon.

Tomjon, so good they named him twice, is the true heir to the throne of Lancre who has fallen in with a troupe of actors and missed his destiny. Well one of them anyway.

The demon's name is WxrtHltl-jwlpklz. In the animated version it's pronouced like this. I elected not to try and get the vowel-less moniker right and instead simply made it up every night. It had a tendency to get longer and longer and on the last night ended with Mulholland-Jjones.

The freedom to bully the director allowed us to get away things like that. This freedom extended to the music choices Anna Masing's entrance as Lady Felmet to the Imperial March from Star Wars and Mike Everhard's first appearance as Duke Felmet to the theme from The Magic Roundabout.

In Tomjon's last scene the cue was a guard revealing the ultimate fate of the Duke. Andy Cartwright played the guard and the line was always wildly different. On one night it was death by splinter and on another he said "I can't believe I've just seen that. The Duke's dead. That was such an unlikely death that if someone saw that in a play there's no way they would believe it." 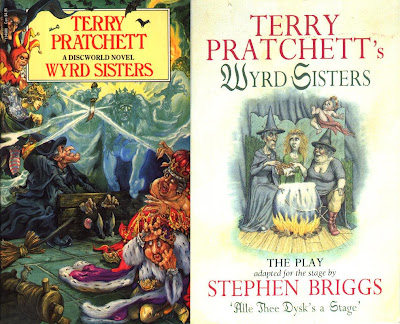 Posted by Dave at 10:00
Email ThisBlogThis!Share to TwitterShare to FacebookShare to Pinterest
Tags: Acting, Discworld