Most of the week before the marathon was spent wondering which part of Europe Brogan was in. When he was back in Blighty, the worrying shifted to the weather. The forecast was for a very very hot day. As far as the weather goes: I am really good at the cold. I barely feel it, but I'm not a fan hot weather. Marathon or no marathon.

We arrived at the start with about an hour to spare as soon as we had handed in our kitbags and excess clothing it started to rain. Had we been running it would have been fine, but we were standing around waiting for the race to start and watching each other shiver.

We made our way to what are inauspiciously refered to as 'pens'. Despite the three of us having consecutive numbers it transpired that Brogan was to be in Pen 8 while Mark and I were supposed to be in Pen 9. In the mass of people it seemed unlikely that if we didn't start together that we would be able to find each other. So we waited for a distraction and bluffed our way into Pen 8.

It stopped raining and the race started. The inhabitants of Pen 8 shuffled forward as the 10,000 or so people ahead of us made their way across the starting line. It took us about twenty minutes to get there and then we were running. A marathon.

We started with a comfortable pace and the first thirteen miles flew by. All of a sudden we turned a corner and tower bridge loomed into view. It's true what they say about ignorance, it really is bliss. My lack of geographical knowledge in London had never served me better than the surprises it afforded me on the marathon route. We crossed the bridge and as you turn right you begin seeing runners coming towards you. Faster runners who are closer to finishing than you are. We also started seeing people we knew. Brogan's family and friends were there and tellingly mine weren't. Neither of these things helped my state of mind.

The next five miles or so were much tougher, but when I saw my family at 20 miles it made a huge difference. Brogan asked if I wanted to stop, but I wasn't sure if I stopped whether I'd be able to get started again. The sight of my mother, father and cousin running along the side of the road kept me going. And then they kept cropping up, we saw them at 22 miles and again at 25. They must have been running faster than we were. 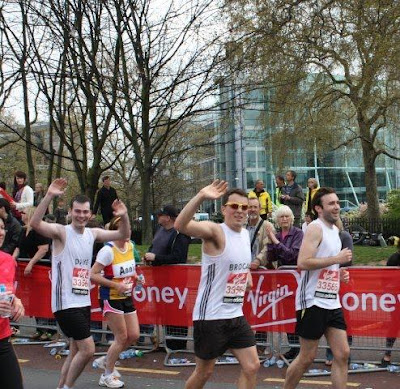 I was definitely running slower and slower, and at one point I was overtaken by somebody walking. I couldn't run any faster, Brogan was struggling to get into a rhythm without getting faster and Mark was sort of running about in between. The two of them would regularly have to slow down to let me catch up which can't have done either of them any favours. For the most part Mark was in the best form with an army of friends cheering him on and women throwing themselves at him.

The crowd were great and having our names printed on our shirts definitely helped. There came a point that I thought if I heard one more complete stranger read my name aloud encouragingly that the lump in my throat might it's way out. Minutes later I was crying like a baby.

The last five miles or so alternated between being alright and being really difficult. The last mile was agony, we slowed right down in order to keep something in the tank for the finish. We crossed the finish line together with a time of 05:34:22.

Just passed the finish line an official looking bloke stopped us and asked "Do you want the good news or the bad news?", Mark asked him for the bad and he said "False start. But the good news is we're doing it all again in five minutes time."

The commonest question afterwards was "Would you do it again?" 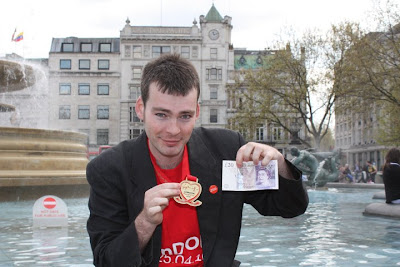 Well now it's over, done, finished. All the more reason to sponsor us.

I wish I could have come and cheered you on! I actually got paid once to cheer on marathon runners...we had to be in the docklands for 7am dressed in bright green jumpers (sponsored by Sony Ericsson I think). I was feeling miserable on the way there, it was an early Sunday morning and I was thinking about how much crappy promo work I'd been doing lately to pay the rent. Four hours later, my voice had completely disappeared from all my screaming but I was in such a good mood for (hopefully) having helped those runners. I'm glad people were shouting your name and congratulations, I know I joke about it but it's a really cool thing to have done for charity! :)