The big day and the big distance are only a month away...

We three ran the Reading Half Marathon last weekend. It was good to get an experience of what running with a few thousand other people is like. The Mayor of Reading chose to start us off with the phrase "Milk your glory". Yep.

It took a while for 18,000 people to cross the starting line and so by the time we had, the front runners were already at the three mile point. Here they are on the left at about half way. Probably mere seconds later.

Almost immediately after I started running my knee flared up again and although it was painful I was determined and I kept running. Slow and steady wins the race and all that. I was surprised by the number of people who started walking at the first opportunity. What's the point? Do a sponsored walk.

Another common sight was people who ran as fast as they could for as long as they could and then walked until they felt they could run again. Surely that sort of stop/start running puts more of a strain on you than just running slower? Very few of the stoppers took the time to look behind them before they stopped. I had quite a few near misses. 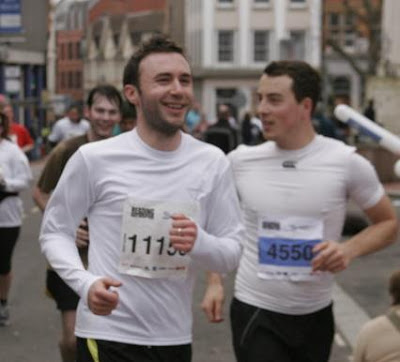 The first third of the route was the hardest for me. My knee was tight and it wasn't easy dodging around the other runners. As people sped off the pack thinned and it got a bit easier. We then saw many of the same people further along, often struggling as we passed them.

Being a cynic, I hadn't really believed that the crowd really helped, but the people of Reading proved me wrong. Just you try and quit when a complete stranger looks you right in the eye and says "well done". Brogan's family were at about the halfway point which was exactly when I needed a boost. Suddenly I was running faster and enjoying it. My knee was grumbling less and it was less effort to keep up with the other two. The penultimate mile or so was a bit of a slog as you are sent off on a big loop and it feels as though you are getting no closer to the finish line. Sooner than I thought we were at thirteen miles and then the last 400 metres. We ran into Madejski Stadium and it was once round the outside of the football pitch to the finish line. I sped up, I ran as fast as I thought my knee could handle. I probably ran faster. We crossed the line together. My time was 2 hours 32 minutes and 48 seconds.

So now I am resting the knee. 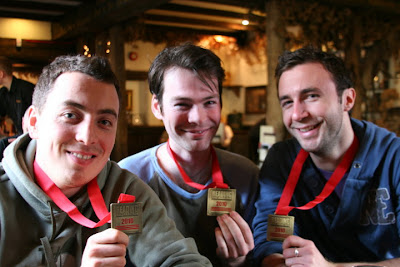 Here we are looking like Jim Fixed It for us. You'd have to be cruel not to sponsor us.

Posted by Dave at 10:00
Email ThisBlogThis!Share to TwitterShare to FacebookShare to Pinterest
Tags: Running