Scholer: I’m going to tell you two stories that accompany this next item and I want you to tell me which one you think is true.

This is Mermaid’s Hair. 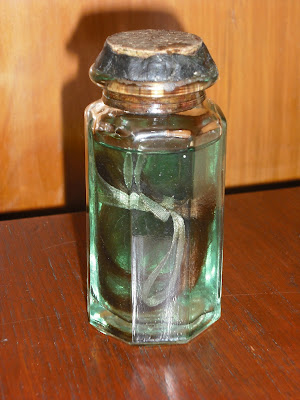 This was lost to me by a pirate captain in a gambling den in Turin. He got it from a sailor who was lured onto some rocks while at sea by the most beautiful singing he had ever heard. As he got closer he saw the most beautiful woman he’d ever seen stood right on the edge of the rocks. The waves were crashing all around her and the sailor decided that she needed rescuing. As he got close enough to pull her aboard the singing turned to screeching in his ears and the most beautiful woman he’d ever seen was gone, replaced by a bitter and twisted hag with pieces of her face falling away. She scratched at him with her claws, but he was quicker and he swiped at her with his cutlass. He meant to do her a serious injury but all he got was a lock of her hair.

Being a strange sort of a fellow he kept her hair as a memento and although he didn’t know it, it was a good luck charm. It made his life easier in ways he didn’t even realise, doors that would have been closed to him opened because of it. He took it to a wise old woman who clocked it straight away. “That’s Mermaid‘s hair” she said “a single strand of mermaid’s hair is an ingredient in the most potent of love potions”. Which is when he got greedy trying to make people fall in love with him. And that’s how he lost it to the pirate and how the pirate lost it to me.

The other story is that this is just a lock of hair I fought in a barbers in Paris, tied a ribbon round it and kept it in a bottle.

So goes my tale of the mermaid's hair. It was slightly different everyday depending on the reactions of the children, but what do children learn from this little story about Henry VIII? Absolutely nothing, but it is sandwiched between me asking questions to try and discover what they already know (and if they reveal that it's not very much, supplying the answers myself) and inviting them to come up with stories themselves in order to help me sell the silks. It's an opportunity for them to relax and it gets them in the right frame of mind to contribute to the coming scenes.

After seeing the play, the children are treated to a workshop in which they write letters with quills to Henry VIII or Lady Knyvett, and then they sing a sixteenth century song, dance a couple of sixteenth century dances and play some sixteenth century musical instruments. Having seen the universal effect it has on children, I truly believe the harp is a magical instrument. I recommend that every school invest in one for the mollification of children.

If you were going to categorise a show like this you would probably call it Theatre In Education, but that conjures up a image that sells it short. What Clio's Company have achieved with this show is far better than a TIE show has any right to be. either we need to stop categorising theatre or we need a new category.

Hardest question to answer this week:
"If your silks are that good, why don't you wear them?" 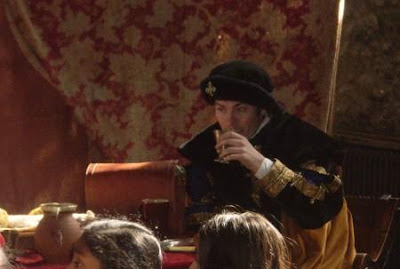 Posted by Dave at 10:00
Email ThisBlogThis!Share to TwitterShare to FacebookShare to Pinterest
Tags: Acting, Baited Hooks