Possibly to help in these days of self-isolation, every episode of Stewart Lee's Comedy Vehicle has been made available in the UK on the BBC iPlayer.

I went to see this TV show being recorded with my sister. When we arrived at the venue, I took our coats to the cloakroom while she found us some seats. As we separated I said "don't sit at the front", I walked into the main auditorium and discovered that she had sat right on the front row. When the lights went I was still very much illuminated. I find myself featured far more prominently than I had expected.


I'll do posts on the later episodes, that lead to me putting this show on my acting CV, but in the meantime, I make a couple of very fleeting appearances in the first episode, Toilet Books. Thats's not why you should watch it though. You should watch because it's very well observed, very funny and really hasn't dated much in the eleven years since it was first broadcast. You can watch it here. 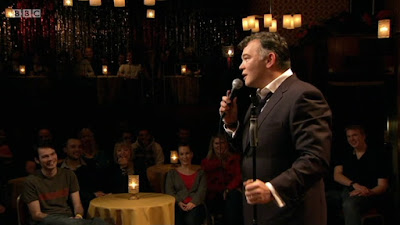 I have no idea about watching it places other than the UK.
Posted by Dave at 10:00
Email ThisBlogThis!Share to TwitterShare to FacebookShare to Pinterest
Tags: Acting, Stewart Lee's Comedy Vehicle