We both enjoyed the film more than I expected. Sarah laughed at Data's singing, liked the Argo sequence and was glad to see Guinan and Spot back. She was disappointed that Troi was now married to Beardy and that we see more of Shinzon than the Enterprise crew. Then Data jumped ship and saved Captain Picard. Sarah was on red alert and knew something was up. Data fired his phaser into the green MacGuffin and exploded into a billion separate fragments. Dead, dead, dead.

Sarah stared unbelieving at the screen and cried. She cried all though Picard's "absent friends" toast. She stopped crying, but still couldn't quite believe what had happened.

B-4 began to sing 'Blue Skies' and what I had hoped would be an encouraging note to end on didn't really make much of a difference to her. It wasn't really her Data.

Fearing the worst I had bought Sarah a copy of Star Trek: Countdown, in which, somehow, Data subsumes B-4 and becomes Captain of the Enterprise (I haven't read it yet myself), she was touched, but it didn't stem the tears. 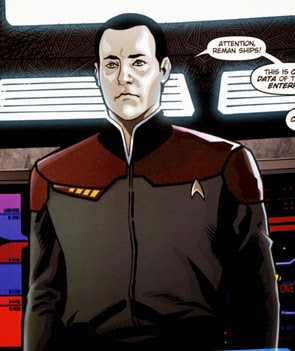 Sarah cried, but it could have been worse. She might not have cried.
Posted by Dave at 10:00
Email ThisBlogThis!Share to TwitterShare to FacebookShare to Pinterest
Tags: Star Trek