I should point out that the following contains massive SPOILERS for Serenity, Doctor Who and all forms of Star Trek.

My girlfriend has become a Star Trek fan, but when I first met her she had never seen any.

She liked me and I liked Star Trek, so she decided to give it a chance, but I was resistant. Here was a thing that I liked, but I wasn't sure if I was ready to share it. I ummed and ahhed about what to watch to try and show off Star Trek in the best possible light. In an effort not to have to decide, we watched JJ Abrams' 2009 Star Trek film. I figured, since it was designed to be accessible to a new audience, it would be a good way to dip a toe in the water and since it was so new it wasn't necessarily 'my' Star Trek. If she'd hated it, that would have been it and I would have gone back to watching the show when she was out. 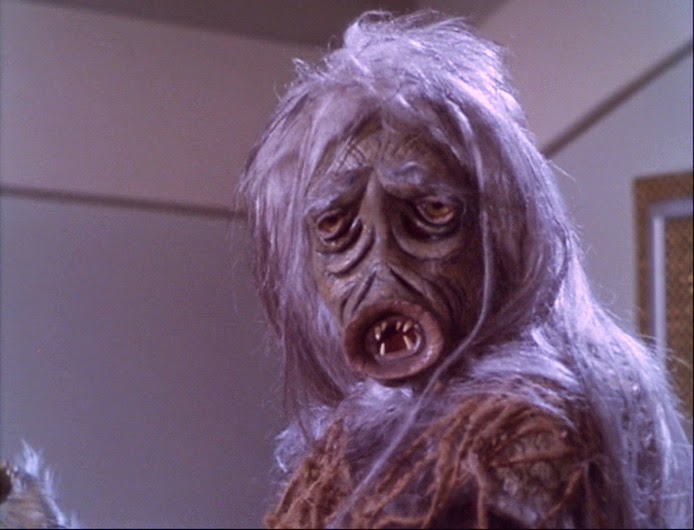 She loved it. The next day she suggested that we watch some more and not having made the decision about what to show her we started at the beginning and watched The Man Trap, the first broadcast episode of the original series. I watched it with one eye on the television and the other on Sarah. Since she loves Doctor Who, I wasn't worried that the effects might not seem as special as they did in 1966, but having seen 2009's offering if she didn't like the original version of the Enterprise crew I was going to be very disappointed.

I had no reason to doubt. We watched the first episode and she enjoyed it and I gave up trying to work out what to show her and we simply carried on watching in broadcast order. Sarah loved seeing the kid from Gentle Ben, Sulu's fencing, The Trouble With Tribbles, the silliness of planet Mudd, the re-education of Uhura ("bluey") and by far and away her favourite character was Spock. 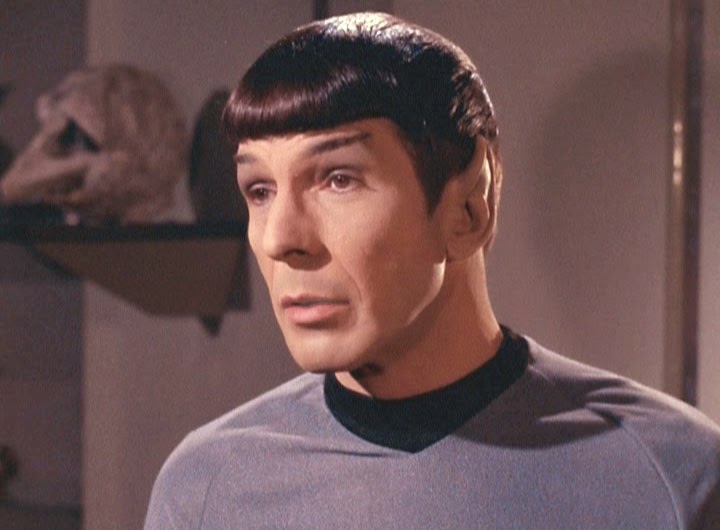 Eighty episodes later we started in on the animated series and Spock's pet euthanasia, Mudd's love potion and the crew regressing to babies all impressed. Then we hit the big time, and The Motion Pictures. The first was received well with Sarah enjoying it more than I expected, but it was the second I was really worried about.
So far, Sarah had been deliciously spoiler-free, but I was worried. Star Trek II: The Wrath Of Khan is a brilliant film and the ear creatures, "Khaaaaaaaaaaaaaan!", Carol Marcus, "from hell's heart I stab at thee" and the submarine battle in space are all excellent, but again I was watching Sarah as much as the screen. To save the ship Spock walks into an irradiated engineering compartment and takes the lid off a thing with sparks. Kirk says "He'll die" and Scotty replies "He's dead already". Sarah was incredulous. Spock can't be dead, can he? Can he? She was bereft. She cried. A lot.

The next day we were set to watch the third film. She had no idea that it was subtitled The Search For Spock and was unsure about watching it. Dubiously, she elected to give it a go. The gap at the beginning between William Shatner and DeForest Kelley's credits was torturous, but Sarah got the drift. Between Sarek's expectations, McCoy using Spock's voice, the Vulcan boy, the Genesis planet et cetera, it's pretty obvious where it's heading. And then there he was brought back to life. Sarah cried again. A lot.

Star Trek IV: The Voyage Home was a big hit. No tears. Then we began watching Star Trek: The Next Generation (broadcast order, remember). Sarah took a while to adjust to a new crew, but managed to get into it just in time to be affected by Tasha's death. More tears. She enjoyed the cameos by McCoy, Spock and Scotty, disliked Q from the start, laughed loads at the narcotic split lentils of Symbiosis, laughed even more at the musical instrument from We'll Always Have Paris (left), was Lwaxana Troi's biggest fan, mocked Riker's beard, mocked Riker, enjoyed anything to do with Guinan, cried tears a plenty when Sarek died, loved Alexander Rozhenko's dungarees, Spot, Gowron's starey eyes, and was impressed by the likes of The Measure Of A Man, Yesterday's Enterprise, Captain's Holiday, The Offspring, The Best Of Both Worlds, Brothers, The First Duty, The Inner Light, Rascals, Relics, and All Good Things… She laughed raucously at the cut rungs of Starship Mine and found Frame Of Mind hilarious. I wasn't surprised when Data became Sarah's new best friend. She was even willing overlook his abuse of the Sherlock Holmes canon. 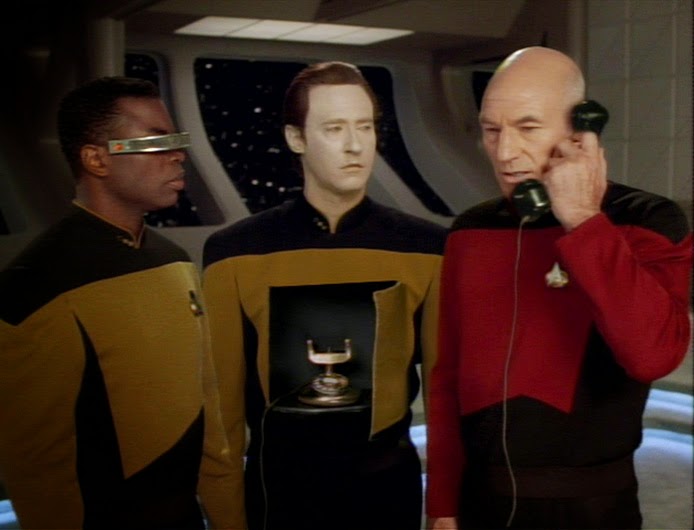 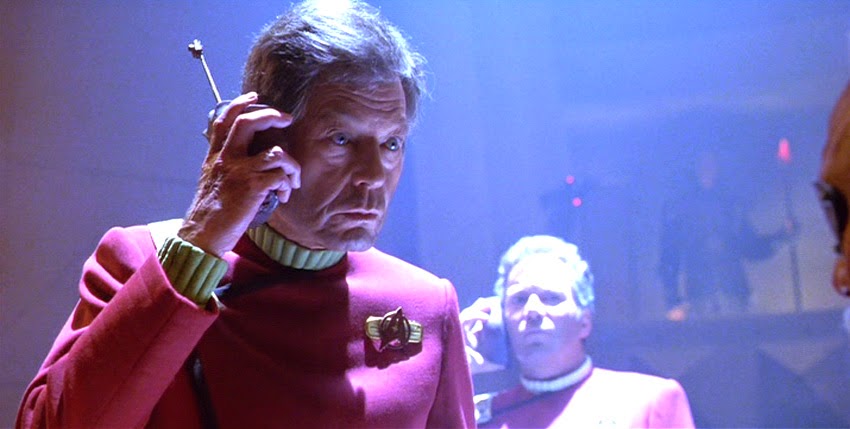 We returned to the silver screen for Star Treks V and VI. Both big hits. The former is not nearly as bad as its reputation and what's been refreshing about watching these with Sarah is that she is oblivious to that reputation anyway. She felt that The Final Frontier was the most in keeping with the series it span off from. The latter film, The Undiscovered Country, is impossible not to like, but seeing Captain Sulu, Worf's grandfather, "Earth, Hitler, 1938" were all great and we spent a lot of time recreating Uhura's sarcastic laughter. 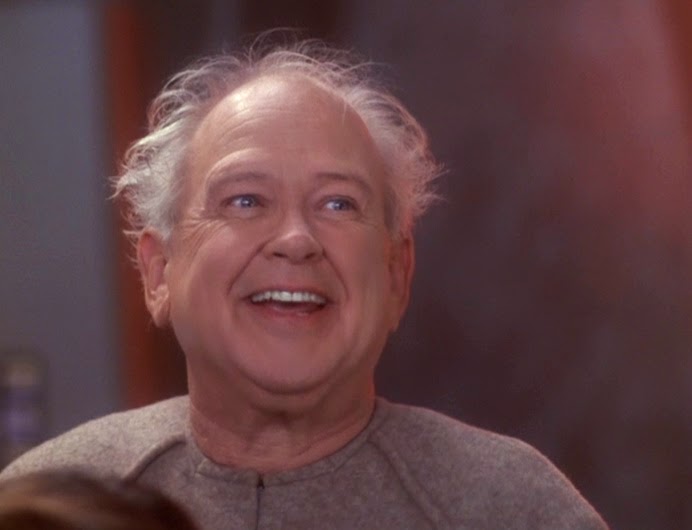 We reached Deep Space Nine and I was back in the position of really hoping Sarah would like it. DS9 is my favourite and because she was so taken with TNG, I thought a darker Star Trek might also be a harder sell. And it was. Where TNG is largely easy TV to watch, DS9 makes the viewer work and while Sarah enjoyed the pilot, it took a while to warm to a more abrasive crew dynamic. She compared it to a tough day at the office. Eventually she fell in love with Siskos Benjamin and Joseph, Rom, Odo, Kira, Opaka and Nog. She loved to hate Gul Dukat, Kai Winn, Weyoun and the female Changeling, laughed repeatedly at the Bajoran man who shouts "Shifter" in A Man Alone, was glad to see Worf back, watched Trials And Tribble-Ations with a constant grin from ear to ear, the revelation that Bashir was a changeling was a fantastic shock, Morn's fake death left her briefly despondent, she loved episodes like of Far Beyond The Stars, Honor Among Thieves and In The Pale Moonlight, made up her own expletive-filled Breen dialogue and adored the genetically enhanced Patrick. She wasn't bothered by the epic space battles, but I think the character development more than made up for it. The final shot of the final episode rolled around and Sarah cried until it was accompanied by the sound of an ice-cream van outside, which punctured the moment pretty spectacularly. 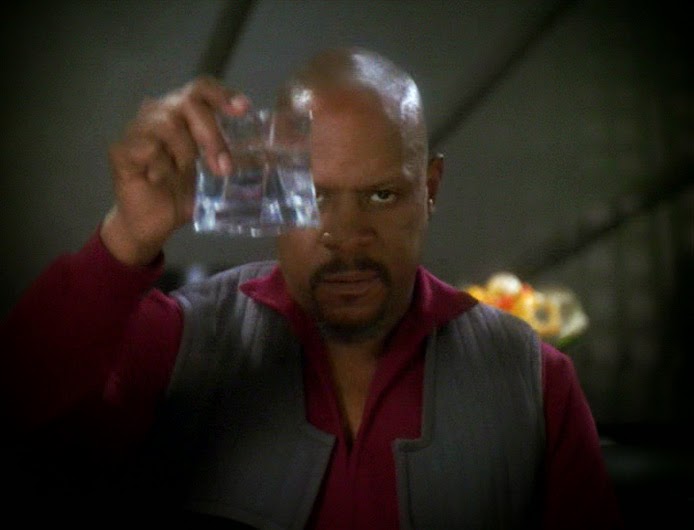 I don't remember if Sarah cried at Kirk's death in Star Trek: Generations, but she loved the 'promotion' of the TNG crew to the silver screen, Beverly getting soaked, Data's emotion chip, more Guinan, more Spot, the bizarre way Picard's illusory daughter says "thank you for the doll", the demise of Lursa and B'Etor, Data's expletive and Kirk and Picard together. 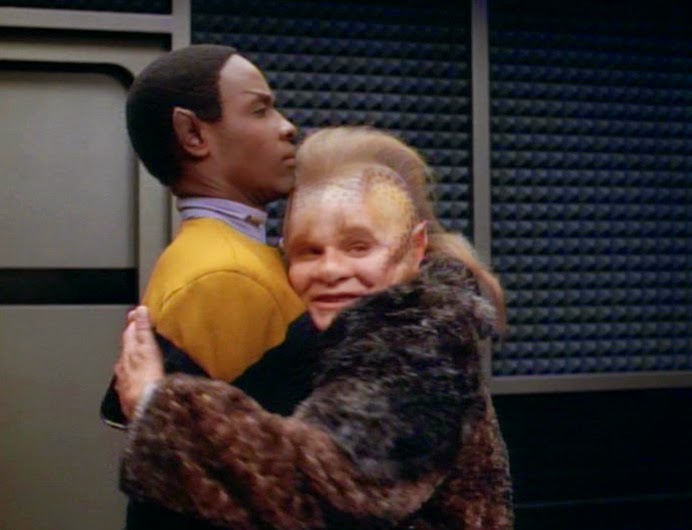 Star Trek: Voyager had a far easier ride. Neelix was an instant hit, the Doctor's pomposity was very popular, she was wary of Seven but warmed to her, while Chakotay and Kim failed to impress her at all. Sarah's biggest worry about the show were all the detours that took the ship off course and provided the drama, Sarah would have preferred it if the USS Voyager had flown in a perfectly straight line and the crew had only been required to conduct some light admin. She was a big Naomi Wildman fan, but even she thought Once Upon A Time was pretty awful, Barclay's efforts to get the crew home were very popular and Neelix's departure caused more tears.

Back on the big screen, Star Trek: First Contact was very well received. Sarah loved seeing her TNG friends again, Alfre Woodard as Lily, Barclay's cameo, the spacewalk scene, the Borg Queen, the Moby Dick speech and everything Data does, while Insurrection left her largely underwhelmed. 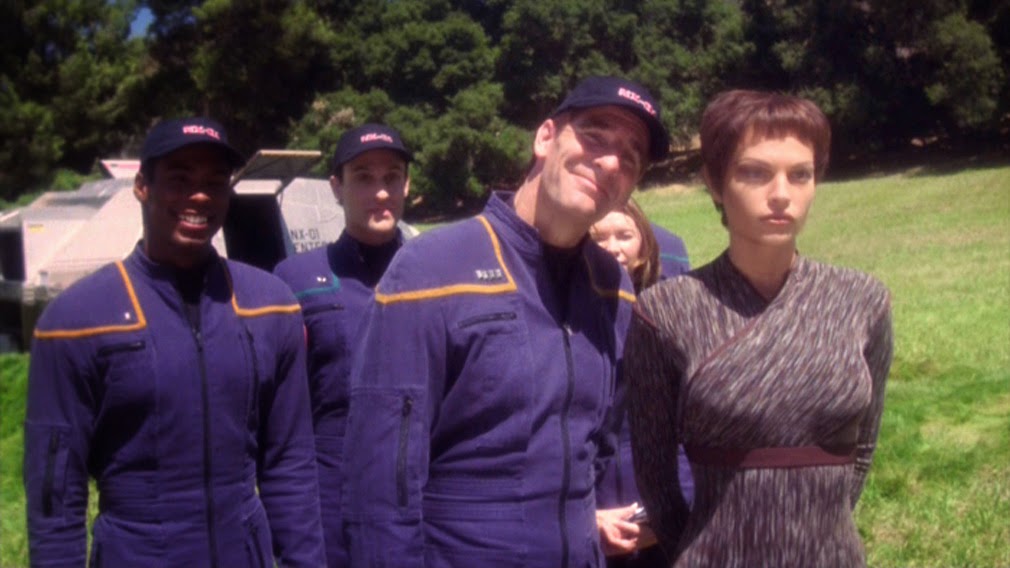 Enterprise was a shock to the system. Sarah hated the theme tune (who doesn't?), liked T'Pol, Trip and Phlox and adored Porthos, giggled at Trip's wrist nipple, took a while to get into the original mission but by season 2 was really enjoying it, found the Suliban creepy, giggled at Shran's wiggling antennae, decided Daniels was in love with Archer, initially got very into the search for the Xindi superweapon before describing as "a bit of a misstep" and then got a bit bored of it, hated the revised theme tune (who doesn't?), we laughed derisively through Extinction, loved every minute of Phlox and Porthos double act episode Doctor's Orders, willed T'Pol and Trip together, performed some excellent air guitar to the end theme, was thrilled to see Brent Spiner back, couldn't have cared less about In A Mirror Darkly, had a bit of a cry when Elizabeth died, another one when Trip joined her and disappointment at Riker's domination of the screentime in the finale. 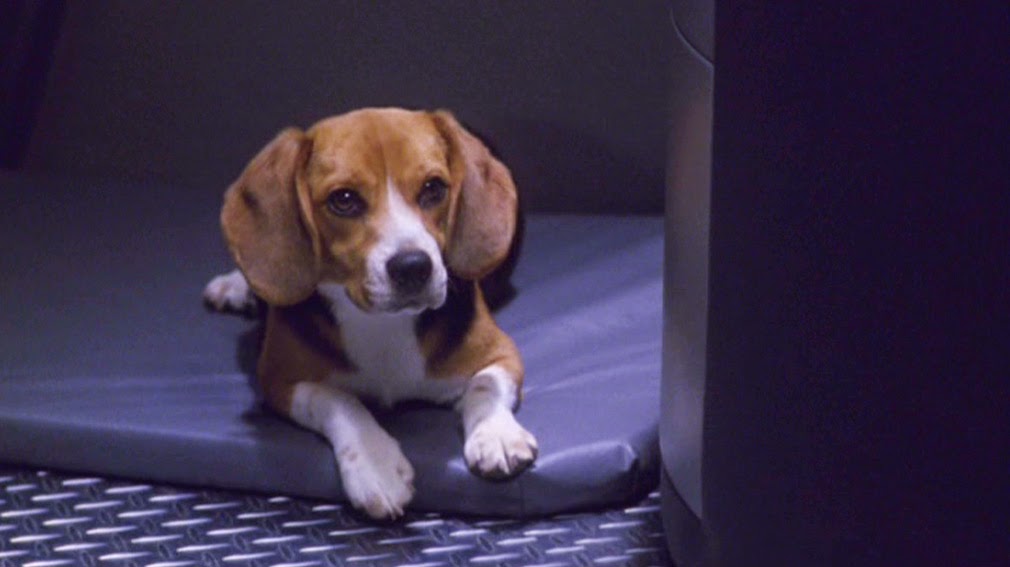 I've been trying to stave off the inevitable and I floated the notion of watching the Remastered versions of the original series, but Sarah didn't go for it. Instead we've watched The Cage, Free Enterprise, The Captains and both Trekkies documentaries.

I don't mean to make her sound like an emotional wreck, she isn't, but she does get attached. We are about to watch Star Trek: Nemesis. In about a hundred minutes, Data is going to sacrifice himself so that his crewmates might live and Sarah is going to cry. I wondered about pretending there was no tenth film, but I can't bring myself to lie to Sarah. I wondered about spilling the beans, but it would ruin the first three quarters of the film and they arguably need all the help they can get. We watched something a while ago, I can't remember what, and Sarah got a bit teary. We talked about it and she sees it as a part of how she enjoys things. She wants to get emotionally invested and some crying is apparently an acceptable side-effect, yet I feel like I'm inflicting the tears upon her. In another discussion, we talked about Wash's death at the end of Serenity, and I was wondering whether his death would have still had the same effect on her if she had already known there wasn't going to be a Serenity II (I'm still holding out hope by the way), and the answer came back as an emphatic yes.

Wish us luck.
Posted by Dave at 15:00
Email ThisBlogThis!Share to TwitterShare to FacebookShare to Pinterest
Tags: Star Trek

TNG dominance aside, the decision to have the last Enterprise story told through an unreliable narrator was bizarre.

Ridley, which version of the theme did you prefer? Maybe the first 96 episodes were all set on the holodeck as well. Someone just left it on.

Tony, well it did take us about three years...