"The Past Is Another Country. 1987 Is Just The Isle Of Wight"

So says the Ninth Doctor in Doctor Who's Father's Day.

1987 was the year that Klaus Barbie went on trial for war crimes committed during World War II, the first ever Rugby World Cup kicked off, Margaret Thatcher was re-elected as Prime Minister for a third time, the Dusky Seaside Sparrow went extinct and someone briefly hijacks the signal of two American TV stations replaces it with a strange video of a man in a Max Headroom mask.

These are a few of my favourite things from 1987:

Withnail And I
Paul McGann, Richard E. Grant, Richard Griffiths and Ralph Brown are all fantastic in possibly the most quotable film ever made. All of Withnail And I's set pieces are brilliant, the soundtrack is wonderful and "The sky's beginning to bruise, night must fall and we shall be forced to camp" is one of the most beautiful sentences ever spoken aloud.

Empire Of The Sun
Christian Bale is phenomenally good in Steven Spielberg's adaptation of J.G. Ballard's autobiographical novel. His journey from spoiled ex-pat brat to Internment Camp prisoner-of-war wide boy, witnessing the flash from an atomic bomb along the way, is fascinating and beautifully told.

The Living Daylights
Timothy Dalton's first foray as 007 establishes him as the best Bond. Maryam d'Abo, Art Malik, John Rhys Davies and Joe Don Baker are great. Stunning model work, some very impressive stunt work and a great script mark this out as a brilliant Bond movie. Darker than many of its predecessors yet losing none of what makes Bond Bond.

Radio Days
Woody Allen's tribute to the Golden Age of Radio of his youth is a love letter to a bygone era that rises above mere nostalgia to be a fantastic film. Mia Farrow, Julie Kavner, Seth Green, Danny Aiello, Wallace Shawn, Michael Tucker, Dianne Wiest and Woody himself all give wonderful performances. "Who's Pearl Harbor?"

September
Woody Allen's other movie this year is a tense and claustrophobic film that makes no claims on having the gag rate of Radio Days. Mia Farrow, Dianne West and Elaine Stritch are wonderful. September is akin to a very bleak piece of theatre on film.

Predator
The story may be thin and the script isn’t overburdened with great lines, but Predator has something indefinable that raises it above most of the action movie competition. The jungle location, music and sound design are great, Bill Duke gives every line such fantastic conviction and the realisation of the creature is brilliant at every stage. The allegory of a hunter more deadly than man is apt and explored here without comment.

Doctor Who: Paradise Towers; Delta And The Bannermen; Dragonfire
Introducing Sylvester McCoy as the Seventh Doctor, the twenty-fourth season is possibly the most varied. Doctor Who does High Rise as the Doctor and Mel visit Paradise Towers in a story that gives the first real insight into the character of the new Doctor and McCoy is wonderful. Elizabeth Spriggs, Brenda Bruce, Clive Merrison and Judy Cornwall are great, the sets are beautiful and Stephen Wyatt's script features one of the best examples of 'world-building' in SF. "speaking from Wales in England", Delta And The Bannermen is a fun runaround with "space buns and tea", the fifties period setting is really nice, Ken Dodd, Don Henderson, Stubby Kaye, Johnny Dennis, Richard Davies and Hugh Lloyd are great and the question mark umbrella introduced here is a brilliant prop. Season finale, Dragonfire is excellent: the philosophical debates are nice, the pop culture references that take in everything from Alien to The Wizard Of Oz via The Unfolding Text and a lot more besides are great, Stellar’s scenes throughout are lovely, Kane’s death is fantastic and Mel’s farewell scene is wonderful, but this is Ace’s story and Sophie Aldred makes a great debut as the character arrives almost fully formed. McCoy, Edward Peel and Tony Selby are fantastic, while Bonnie Langford gives her best performance. The story is more traditional in tone than the rest of this season and a great sign of things to come… 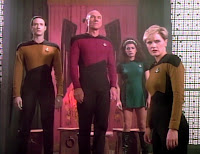 Star Trek: The Next Generation: Encounter At Farpoint; The Naked Now; Where No One Has Gone Before; Hide And Q; Haven
The pilot episode of the third Star Trek series sees the launch of the USS Enterprise NCC-1701-D and an Encounter At Farpoint, that ably introduces all of the regular characters. Patrick Stewart, Jonathan Frakes, LeVar Burton, Gates McFadden, Brent Spiner and Colm Meaney all make great debuts and DeForest Kelley's cameo is lovely, but John de Lancie steals the show out from under everybody as Q. Overlooking the fact that The Naked Now is a near-remake of the original series episode The Naked Time and also that it was a terrible idea for a second episode, but the intoxicated interactions of the crew are a lot of fun. The Enterprise boldly goes Where No One Has Gone Before in the first great episode of TNG with impressive imagery and great performances from Stanley Kamel and Eric Menyuk. De Lancie makes a welcome return and wears as Q turns his attentions to Riker in Hide And Q. A visit to planet Haven and an episode with a slight story, but a wonderful performance from Star Trek's First Lady Majel Barrett as Lwaxana Troi.

The Return Of Sherlock Holmes: The Sign Of Four
Sir Arthur Conan Doyle's second Holmes novel is adapted into the first of Granada's feature-length episodes and the results are very good indeed. As usual Jeremy Brett and Edward Hardwicke are excellent, but Gordon Gostelow, Emrys James, John Thaw and Toby the dog all make great additions to the cast. 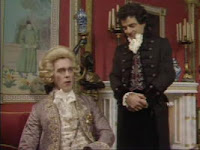 Blackadder The Third: Dish And Dishonesty; Ink And Incapability; Nob And Nobility; Sense And Senility; Amy And Amiability; Duel And Duality
Another series, another generation, another rung down the political ladder sees Blackadder as servant to the prince regent and possibly at his most conniving. The Dunny-on-the-Wold by-election of Dish And Dishonesty is a great parody of the British electoral declarations and giant turnip growing, Helen Atkinson-Wood, Denis Lill and Geoffrey McGivern are wonderful, while Hugh Laurie is a phenomenal addition to the cast. Blackadder's undermining the vocabulary of Dr. Johnson's dictionary in Ink And Incapability and Robbie Coltrane's portrayal of his pericombobulations is fantastic. Tim McInnery, Nigel Planer and Chris Barrie are brilliant in the Scarlet Pimpernelling, Nob And Nobility. I should hate Sense And Senility, since I'm sure it's responsible for the moment after Macbeth is said when someone always, and I do mean always, feels the need to correct the speaker with the phrase The Scottish Play and a wagging finger, but Laurie's delivery of "unaccustomed as I am to public speaking..." is absolutely hilarious, sadly The Bloody Murder Of The Foul Prince Romero And His Enormously Bosomed Wife is unlikely to see the light of day. Miranda Richardson is as wonderful as ever in Amy And Amiability and Stephen Fry is fantastic as Wellingon in Duel And Duality 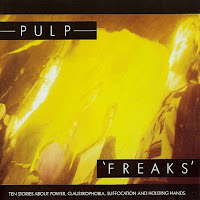 Pulp: Freaks
Described on the cover "Ten stories about power, claustrophobia, suffocation and holding hands", the second album is darker than its immediate predecessor, but it's probably darker than its successors as well. The Freaks of the title aren't celebrated as the 'Mis-Shapes' would be eight years later. The lyrics of the likes of 'I Want You', 'Master Of The Universe' or 'They Suffocate at Night' aren't uplifting, but they are honest, while Russell Senior's vocals on 'Anorexic Beauty' reveal how varied Pulp's sound could be.
Stand-out tracks: 'I Want You', 'Being Followed Home', 'Master Of The Universe', 'Life Must Be So Wonderful', 'Anorexic Beauty', 'Don't You Know', 'They Suffocate at Night'

Equal Rites by Terry Pratchett
Pratchett broadens the scope of his Discworld novels beyond Rincewind with the introduction of Granny Weatherwax and contrasting the female witches being in touch with nature with the male wizards whose magic is somewhere between science and ceremony.

Mort by Terry Pratchett
The fourth Discworld novel was the one that defined the possibilities of the series as it took a minor character from the first three and pushed him into centre stage. The day to day business of the Discworld's anthropomorphic personification of Death is fantastic, but the idea of the titular Mort being hired as his apprentice is genius. It would be easy for a book about Death (and a book about death) to be downbeat, morose or crass, but this is intelligent, witty and has a great depth to it. He likes cats, curries, talking in BLOCK CAPITALS and would call his Binky and over the course of this novel it increasingly feels as though Death is on our side. 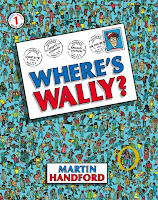 Where's Wally by Martin Handford
Can you find our bespectacled and behatted hero as he hides at the beach, ski slopes, camp site, railway station, airport, sports stadium, museum, department store and the fairground in the most down to earth of his hide and seeks. Augmented, but also bizarrely censored in 1997, so there was both more and less to look for.

Doctor Who: Profits Of Doom!; The Gift; The World Shapers
The Sixth Doctor, Peri and Frobisher defeat a horde of malevolent slugs in the very atmospheric Profits Of Doom! and the slugs work better here than on TV. The trio visit Zazz, planet of jazz, for a party in The Gift and it's nice to se them enjoying themselves, the interlude on the moon and Shug are great. The World Shapers sees the TARDIS return to Marinus in a bonkers, but brilliantly imaginative end to the Sixth Doctors run: John Ridgway's artwork is phenomenal, the deaths are horrific and the continuity is convoluted, but also compelling.

Watchmen: Fearful Symmetry; The Abyss Gazes Also; A Brother To Dragons; Old Ghosts; The Darkness Of Mere Being; Two Riders Were Approaching...; Look On My Works, Ye Mighty...; A Stronger Loving World
The second half of Alan Moore and Dave Gibbons' masterpiece increasingly plays with structure, from the symmetrical page layouts of Fearful Symmetry to the increasing influence of Tales Of The Black Freighter. Several issues focus on the story of one individual: Rorshach in The Abyss Gazes Also, Night Owl and Silk Spectre in A Brother To Dragons and Doctor Manhattan in The Darkness Of Mere Being and the characterisation is fantastic throughout. The more ensemble pieces Old Ghosts, Two Riders Were Approaching... and Look On My Works, Ye Mighty... keep the storyline going, while A Stronger Loving World is a phenomenal ending to a phenemenal comic which redefined what the medium was capable of.

Next Month: 1986
Posted by Dave at 10:00
Email ThisBlogThis!Share to TwitterShare to FacebookShare to Pinterest
Tags: Blackadder, Bond, Discworld, Doctor Who, Predator, Sherlock Holmes, Star Trek, These Are A Few Of My Favourite Things, Watchmen, Where's Wally?, Yes Minister

The year of Next Gen! Worth the price of admission alone, even if it did take a year or two for the series become really good.

The year after I graduated high school and started college. A great one that I remember well.

Thanks for the trip down memory lane ;)

You make a great case for 1987 being far more than just the Isle of Wight: Jersey at least...