The Geek Twins are holding the My Favourite Martian Bloghop and inviting everyone to write about their favourite alien, whether they are from Mars or not... 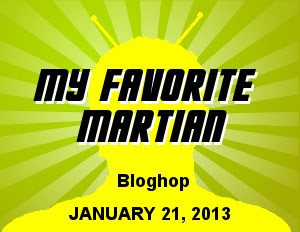 It was tough to choose just one I considered Spock, Worf, Odo, Quark, Rom, Nog, Zek, Garak, Weyoun, Martok, Tuvok & Phlox from the various Star Treks, Chewbacca & Yoda from Star Wars, Tweak from Judge Dredd, Ford Prefect from The Hitchhikers Guide To The Galaxy, The Gronk from Strontium Dog, Dargo & Chiana from Farscape and Nibbler from Futurama, but somehow inevitably I ended up at...

The Doctor, from Doctor Who

Eleven reasons why I chose the Doctor:

1. He begins as intriguing, but distinctly unlikeable. How many loveable characters start out as kidnappers, that consider committing murder and lie to their travelling companions? I can name one. William Hartnell's Doctor is not always easy to like, but even harder to dislike.

2. He can regenerate. Many series are forced to recast as they mature and ignore the fact that a new actor has taken over. Not Doctor Who, they embrace it. He's the same, but different. Hartnell started Doctor Who off on a great footing, but the supremely talented Patrick Troughton ensured its longevity.

3. He could become an action hero without it damaging the show. Jon Pertwee's Doctor was still an intelligent leading man, but he did alien martial arts and worked with the military. The format of the show changed enormously and yet there was never any doubt that it was the same TV show.

5. He is timeless. He is at his youngest when he's an old man and Peter Davison plays an old man in a young body brilliantly.

6. He proved that the clothes do not maketh the man. Sartorially, his clothes are often criticised for standing out (in particular the ensemble worn by Colin Baker), but I would argue they should. A man out of time, should never fit in.

7. He sees the big picture and plays the long game. Sylvester McCoy's dark Doctor bragged about being judged by the quality of his enemies. He would keep people in the dark, put them in danger and let them die in the short term as long as the ends justified the means.

8. His story can never really end. The series ended in 1989, but never really went away. After seven years off the air, Paul McGann brought the Time Lord back to life in 1996. When that didn't lead to a series, it left a void filled by books, comic strips, radio, audio CDs, etc. Nine years after the US TV movie, Doctor Who got another fresh start. If it all ended tomorrow, I'm confident that it would be back before too long.

9. Sometimes he lets someone else save the day. How brave is the series that has a huge relaunch and allows its main character to be almost passive? Fantastic, but passive. Christopher Eccleston's Doctor inspires others to save the day: Rose, Jabe, Gwyneth, Mickey, the possible last Dalek, Cathica, Pete, Jack, Blon and Lynda with a Y all step up to the plate in one way or another, while the Doctor doesn't.

10. Sometimes he can't move on and sometimes he has to. He fled his homeworld and probably barely missed it until he could never go back. He formed lasting friendships and briefer acquaintances all the time, but each of David Tennant's three seasons explores a different relationship: romantic love, unrequited love and friendship.

11. He's outmanoeuvred by his own future. The Doctor's past catches up with him as much as any other character, but as a time traveller the things he is about to do are all already done. Sort of. It's an idea used in Battlefied and to an extent in the multi-Doctor stories, but it really comes into its own with the introduction of River Song. Sometimes so complex that you may need a diagram, her toing and froing, backwards and forwards, with and without Matt Smith's Doctor really shows the possibilities of time travel.

Here's a photo of all eleven Doctors together (presumably from the filming of the forthcoming The Eleven Doctors, you heard it here first): 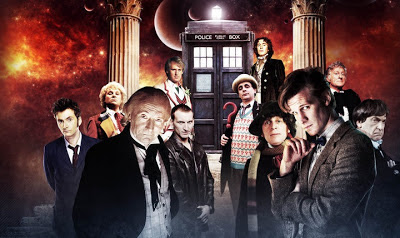 And this is a somewhat terrifying caricature blending them all together again: 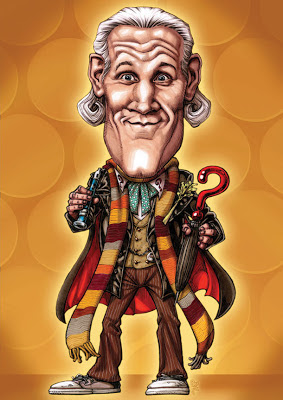 But enough about me or the Doctor, who's your favourite alien?
Posted by Dave at 00:01
Email ThisBlogThis!Share to TwitterShare to FacebookShare to Pinterest
Tags: Blogfests, Doctor Who

No surprise you would select Dr. Who! And no, he never was the best dresser.

I'm going to have to break down one day and give Dr. Who a chance. Too many people love the show for me to do otherwise.

good choice... i always thought he was a brilliant choice... because they could explain all the variations...

BWAHAHAHA THAT last picture cracked me up! I love your choice...the Doctor is a fan favorite.

I have really wanted to get into Doctor Who but I just don't know where to start maybe you can help me. I find your 11 reasons to be spectacular and it just intrigues me even more. So I would like to ask you where should I start watching doctor who? and how should I go about learning about it?

I swear I'm the only one in the universe that's never gotten into Dr. Who. After all your reasons why he's great, though, maybe I should. :D My Favorite Martian Post

I think by far my biggest failing as a nerd is that I still have yet to watch Doctor Who. The long history of the show is intimidating. I'll get around to it though, I swear!

Mmm. When I first read your list, I was sure - I was definitely voting for the Doctor.

But then you reminded me of Garak, who was my favorite alien long before I watched Doctor Who. And Spock, of course. Ford Prefect was also pretty cool, although not in the same class as Garak.

With no way to chose, I flipped a coin, and the winner is the Doctor.

Holy Cow, I'm stunned that I didn't even consider The Doctor! What sort of Whovian am I?? :(

Great post! I too, chose The Doctor. Though I am only familiar with 9, 10, and 11. This blog hopping thing is fun! You gained a follower today.

It was tough to choose just one. The Doctor is a great ultimate choice. I named Garak as among my favorites.

Love that you picked The Doctor. I've only become a fan in recent years. I had to go with E.T.

An excellent choice and I love your choice of photos. I hope they really do all the Doctor's for the special, but we'll see. Thanks for hopping in the blog hop!

Great alien, great reasons. I'm actually a little surprised that I didn't consider The Doctor myself, but I actually didn't consider the question that much, I was guided by my instincts... :)

Still working my way toward Doctor Who. But I'm getting there!

I have never seen the show. Mainly because either I didn't get that channel or had another favorite at the same time slot. I didn't realize that there had been so many Dr. Whos(Whoes?). Anyway, liked your site so am now following by GFC. Julie @ http://icreatepurtythangs.blogspot.com

Now you're cooking! One of my favorite characters of all time - and one of the best continuations of a cancelled show ever! And it's awesome that your eleven reasons are really twenty-two - since you matched the number to the number of Doctors we've had so far! Cheers!

"A man out of time should never fit in." Loved that, and I agree. He really shouldn't. Great post!

I am really going to have to sit down and watch this series and see what all the hub bub is about, your list just makes it more intriguing.

I probably also would be able to get all these weird inside jokes people keep making.

Great choice, though I admit I've only really watched 80s style Dr Who - never really got into the more recent ones.

Teresa, thank you. I don't think anyone has ever described anything I've ever written as spectacular before. I would suggest that the first episode of the new series, Rose, is a good test. If you like that you could go on from there.

Liesel, I think the comments above prove that you're not, but yes maybe you should.

J.W. Alden, it's not a failing and don't be intimidated.

Moira, I'm about to start watching Star Trek: Deep Space Nine from the beginning abain and I fully expect to love Garak all over again.

M Pax, I suppose in a way I got away with choosing eleven at once.

Todd, I didn't see all of E.T. as a child so it never spoker to me the way it might.

Tony, let me know when you get there.

Julie, thanks. I'll be sure to visit yours.

Tyrean, thank you. I had forgotten that I wrote that. I'm quite pleased with it now.

Adorably Dead, yes you are.

Trisha, I first got into the show via eighties Doctor Who, Sylvester McCoy was my Doctor.