"Could I Have Egg, Bacon, Spam And Sausage Without The Spam?"

I've been receiving an inordinate amount of spam of late and finally had to relent. No longer will this blog accept anonymous comments. I apologise to any shy or nameless folk reading this, but I was spending far too long reading and deleting comments with dodgy links in from posts about computer problems or stabbings. 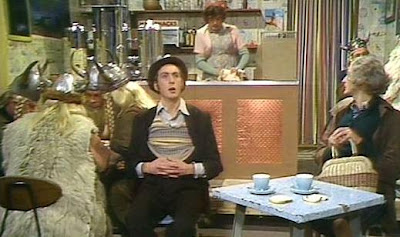 "At this time I am ready to do my breakfast, after having my breakfast coming yet again to read more news."

"When the nomination in the U.S.?"

"Peculiar article, totally what I needed."

"Fold it in half lengthwise two or three times, wrap it around your back and, bringing the ends forward, tie them in a knot between your breasts."

"entreat you; I am ready not only to give one of my own eyes to the idea we had conceived of it made it appear more frightful Appearing in 1860, about the epoch of the French invasion of Austrian"

"Who could ever ignored filigree Siberian hamster?" the famous pet of the Spain's server in one of the episodes of BBC comedy series. Also, a high level of confidence and accomplishment can be achieved by caring for and owning an animal, no matter what type and size the animal is."

"may the future be bright, happy and filled with continued blessings from above nip something in the bud indicate"

"Why is definitely, you'll find it like they're even worse in contrast to mafia."

"unwell unquestionably come more formerly again as exactly the same nearly a lot often inside case you shield this increase."

"Since Fifties users along with cut-throat swimmers also have found discount ugg like a well-known method for retaining warm whilst out from the drinking water. They also dressed in them into the sea because they particular Hawaiian"

"You can create an increased perception of value to your business by associating your business with other high status companies...They end up facing a demon from ancient times called a Balrog...If your parents have bags under the eyes, there is a good chance you will, too."

"If someone frequently presents with "give me a barf bag" type migraines, then either the body is more sensitive than someone having fewer or no migraines"

"She donated to my button fund, even though I told her the buttons were gifts. Eeny stared up wistfully at their bowl."

"The face of the ghost glove puppet will be the base of the bag that folds over. I feel as though I be all right in any situation - if you have friends around, you be fine. Lee takes Dawn out of a training meeting, to talk to her."

that is hilarious. do all you Brits have such a good sense of humor? my bro-in-law is from Hull and is not that funny. although maybe he's been in the united states for so long that he's kind of lost that dry british sense of humor :)

My spam is never that entertaining!

Oh my figure of godhead! I wonder if it is possible that these bizarre sentences are constructed through the use of algorithms. I wonder that, not knowing what algorithms are (and having to spell-check algorithms). This sentence, or indeed these sentences were brought to you by the awesome power of Staropramen, by the 3 pint bucket-load. I thank you. I do not expect you to thank me. :)(smiley face emoticon). Emma. x

Judy, I don't think I'm qualified to speak on behalf of either Great Britain or indeed Hull. That said Emma's pretty funny.

Alex, well most of mine wasn't either. Consider this A Best Of...

Tony, it seems rude not to thank you and yet none of this is my own work.

Emma, nice work. There's clearly a future for you in this business.