Last year, I wrote a post of TV series that stubbornly remain unreleased on DVD. Here are a couple of things that have occurred to me since and are equally unavailable:

Sarah Jane's Alien Files
A spinoff from a spinoff. The Bannerman Road gang are compiling a database of the alien lifeforms they have encountered, with the help of Xylok supercomputer, Mr Smith. Alexander Armstrong voices Mr Smith in all six episodes that each pair him with another member of the regular cast, including two with the late Elisabeth Sladen as Sarah Jane Smith. It would be easy to write it off as a clip show, Sarah Jane's Alien Files would have been the perfect DVD extra, but with all five seasons of The Sarah Jane Adventures on release and no sign of it yet, I think it's time for a solo release. We deserve all the Sladen we can get. 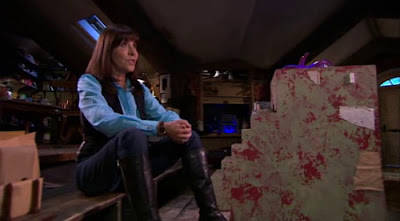 - - -
Red Dwarf: Mobisodes
These twenty-three clips were intended to be viewed on mobile phones. They were mostly animated to the soundtrack of scenes from the show, but the two-part Red Christmas and Skutter Fight, a scene from the unmade Series I episode, Bodysnatcher, were the first new Red Dwarf in nine years. It seems that they are no longer available as phone content and while one of these, a clip from Legion, is featured on The Bodysnatcher Collection DVD, the others have yet to see a DVD release.

Is there anything is curiously unavailable on DVD, that you would like to see get a release?
Posted by Dave at 10:00
Email ThisBlogThis!Share to TwitterShare to FacebookShare to Pinterest
Tags: Please Release Me, Red Dwarf, Sarah Jane Adventures

I emailed 2|Enterrtain about Sarah Jane's Alien Files and this was their response:

"We are sorry to disappoint you but unfortunately we have not acquired the DVD rights to this Sarah Jane's Alien Files, these are owned by the Rights Archive so I am afraid we have no plans to release it."