Nicki Elson, Suze and M. Pax want to know who your Eighties crush was in the I'll Tumble 4 Ya Blogfest: 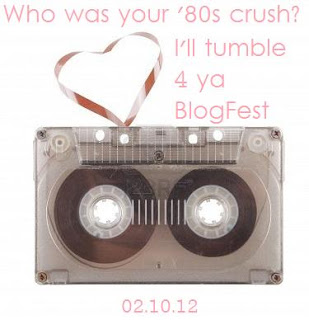 For the record I was born in 1981 so most of my crushing was confined to the Nineties, but I had (and have) a real soft spot for Sophie Aldred.

Aldred played Ace in Doctor Who from 1987 to end of the original run in 1989. Her being there at the end of an era extended the life of the character enormously and she became almost as ubiquitous as the Doctor himself. Ace went on to appear in novels, comic strips, audio dramas, a Children In Need TV special and a BBCi webcast. 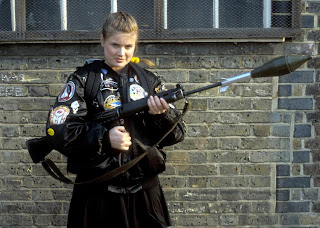 I've met Sophie Aldred a couple of times in the last few years and she was very gracious. The most recent time was at a memorial service for the late, great Nicholas Courtney. He always spoke very highly of her.

The first time I met her I was on Princes Street in Edinburgh during the festival. I was handing out flyers for the shows I was in: The White Rose and The Poisoner's Tale. I made a bee line for her and handed her a flyer. She asked if the plays were suitable for children. I lied and said that they were. I paused to consider the fact that I was lying to Sophie Aldred in the hope she would come and see my show. I couldn't do it. I owned up, after a fashion, saying that the shows were particularly suitable for "children that love Nazis and swearing."

She declined.
Posted by Dave at 10:00
Email ThisBlogThis!Share to TwitterShare to FacebookShare to Pinterest
Tags: Blogfests, Doctor Who

Cool! I never saw any 80s episodes of Doctor Who, but I know of Ace from the books. And I love that you couldn't bring yourself to lie.

Never watched that series of Dr. Who, but she is cute!

I loved Ace. She was everything that all the other companions were not.

Favorite Ace moment was in Silver Nemesis.
The Doctor: I don't suppose you've completely ignored my instructions and secretly prepared any Nitro-9, have you?
Ace: What if I had?
The Doctor: And naturally, you wouldn't do anything so insanely dangerous as to carry it around with you, would you?
Ace: Of course not. I'm a good girl and do what I'm told.
The Doctor: Excellent. Blow up that vehicle.

Funny story - I'm glad you owned up in the end!

How cool to meet a childhood crush.

I love that you had to tell Sophie the truth!!!

Cool that you got to meet her. She is a cutie.

Oh awesome, I've recently been inducted into the world of Dr. Who (w/ the 11th doctor) so I'll keep a special eye out for this lovely lass when I get to the earlier incarnations.

I'm sure she still thinks back on you coming clean about the Nazi's w/ blushing fondness. ;)

Thanks for joining the fest! Even though you're a might young to appreciate most of these entries, I'm sure.

Thank you all for your comments.

Manda, Crikey I can't imagine reading Doctor Who books without seeing the TV episodes of the era first. Were you reading the New Adventures?

Alex, Give The Curse Of Fenric a try...

Timothy, She was then and still is my favourite companion. I really like the Doctor's line from Remembrance Of The Daleks "Ace, give me some of that Nitro-9 you're not carrying!". Thanks for your enthusiasm.

Susan, Thanks, my conscience got the better of me.

Annalisa, It was cool.

Kelly, I wouldn't have been able to live with myself if I'd lied to a childhood hero.

M Pax, It was cool and she certainly is.

Nicki, You should definitely try out some some earlier Doctor Who.

I'm pretty sure she doesn't remember me at all.

It's true, I looked through a lot of the post and wasn't sure who many of the crushes were.

Very cool. Now I want to see those years of Doctor Who because of that photo alone!

What an amusing pick. I'm over here form the blogfest. Chers!

We're big fans of the Doctor at our house. I'm partial to Amelia Pond, myself. Great post!

I didn't know about Dr. Who until recently. Apparently I've been missing out.

LOL on the Nazis and swearing thing...

Glad you were honest with her though ;)

Armchair Squid, thanks. I can't quite get used to Pond.

Theresa, you've definitely been missing out.