Getting To Know Me A-To-Z

Arlee Bird of the A-to-Z Blogging challenge recently posted a Getting To Know You Quiz and then Elizabeth Mueller followed suit. I decided that I would join in as well:

Name: David Black (after a fashion)

Blog: Dave Wrote This. I also contribute to the Mr Carruthers Presents blog, which mostly features posts relating to sketches like these.

Other Online Info: I have a few bits and pieces on YouTube.

10 GETTING TO KNOW YOU QUESTIONS

1. What is the most daring thing you've ever done?
Actually, I think I've just written about it for my upcoming 'R' post.


2. What is your favorite article of clothing?
I'm a jeans and T-shirt man most of the time, but I do like ties.


3. What is your favorite monster?
I'm a massive Doctor Who fan and when I was a kid the Haemovores from The Curse Of Fenric were the most terrifying thing I'd ever seen. They are essentially Vampires, but they are also the end result of human evolution transported back in time to perpetuate themselves. They are only repelled by an faith, and thus big scary concepts like a lack of faith was instantly the scariest thing in the world to an eight year old. The story is full of scary moments: the Haemovores coming out of the sea and swarming through the graveyard, the green contact lenses of possession, the sacrifice of soldiers and a moment that has really stayed with me in which an underwater dead Russian soldier's eyes flick open. It doesn't sound like much, but it haunted me. 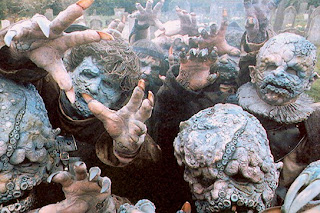 4. If you had to dress up as your favorite literary character, who would it be?
I'm an actor and dressing up is part of the job, but I'm quite content to let someone else decide what I'm wearing. I suppose I'd like to look as dapper as Lucifer Box or James Bond on a good day, but I probably dress like Arthur Dent more often. 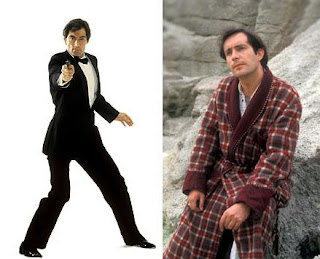 5. What is your favorite fairy tale, urban legend or nursery rhyme?
I like the The Boy Who Cried Wolf and The Pied Piper Of Hamelin. There's something about the 'be careful what you wish for' moral that really appeals to me. 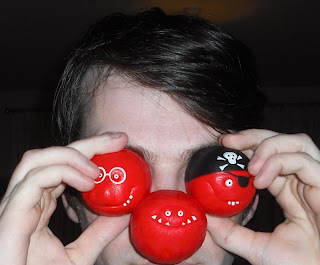 7. What's the strangest item you've used as a bookmark?
Receipts that should have been in my tax return. I was not happy when I realised.


8. Do you have any nicknames? What are they and how did you earn them?
Yes, but I think they are for the people that already know them.


9. Name one habit you want to change in yourself:
I'm a nailbiter and try as I might I can't seem to stop.


10. Tell us something interesting or shocking about yourself:
I'm thirty years old and I still can't tell the time on an analogue clock.


2. What brought you to the A-to-Z originally?
The last couple of years I've heard about the A-to-Z about halfway through April and it's been too late to start.


3. Are you doing a theme?
Not particularly. It's just things that have occurred to me.


4. Are you writing and scheduling posts in advance?
Yes, absolutely.


5. What is your favorite letter of the alphabet, and why?
Q looks cool.
Posted by Dave at 10:00
Email ThisBlogThis!Share to TwitterShare to FacebookShare to Pinterest
Tags: Blogfests, Bond, Doctor Who, Hitchhiker's

Thanks, glad you liked my theme from last year. Got something cool in mind for this year.
I'm going to let Lee know about your post. All of the co-hosts are doing the 'Getting to know you' posts but I think it would be cool if the participants joined in.

Great job! I'll link to this in my next Summary post which I currently have scheduled for March 4--unless I can move it up to this coming Sunday.

I can empathize with you about that nail-biting thing--tough habit to break. I read somewhere that it is hereditary. This may be true--one of my daughters also has the habit.


Lee
Wrote By Rote
An A to Z Co-host blog
Twitter: @AprilA2Z
#atozchallenge

My parents tried everything to stop me biting my nails and nothing worked. I've just looked it up and there don't seem to be any Pros to it, plenty of Cons, but no Pros. The posh name for it is Onychophagia. which sounds impressive.

Yay, thanks for participating in the Getting to Know You questions! Great answers. I'm a cheek biter, so sometimes I think I might prefer biting my nails. Neither one is good, though.

Shannon at The Warrior Muse, co-host of the 2012 #atozchallenge! Twitter: @AprilA2Z

I grew up nail biting. To help myself stop I decided to just go one at a time.

After I had worked up from one digit to all 10 then it was I can only nibble on them if a nail is chipped or cracking.

Lucky me my nails have been chippy and flakey.

Now the question is do you hold onto, spit out or chew up the nails you bite off?

I don't hold onto or chew them.