I wrote a Review-Of-The-Year type post of my favourite Films/TV/Music/Books/Comics etc at the end of last year, and I enjoyed the process enough that I decided to continue writing them working backwards, one per month.

It was largely an excuse to watch lots of DVDs, re-read old comics and reacquaint myself with music that I like, but now that I have almost finished writing for a whole decade I would like to do something with these posts.

So I am announcing today that on the 14th of November I will be holding The Noughties Blogfest. 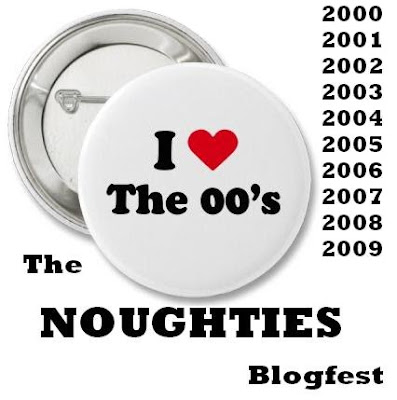 The blog post for 2000 will go up on the last day of October and then on the 14th of November I invite you to tell me about your favourite things from the Noughties.

Choose one thing from each year from 2000 to 2009, be it a film, a TV show, a radio show, a particular episode of a TV or radio show, a piece of theatre, a book, a comic, a song, an album, a gig, a piece of artwork, something online or something else entirely, and then tell us what you love about it.


Join Us...
Posted by Dave at 10:00
Email ThisBlogThis!Share to TwitterShare to FacebookShare to Pinterest
Tags: Blogfests

I like that idea! And it's one of the few days in November I don't already have something scheduled. (Yeah, I have things booked all the way in March of next year!) I have a guest post this Friday, but I can plug it next Monday.

Thanks Alex, glad to have you aboard.

And that is some impressive scheduling!

I followed Alex here and I signed up with both of my blogs. Sure sounds like fun. Thanks for hosting.

Thanks for signing up Rhonda, twice.

Thanks Nebular, I look forward to seeing your list.

Thanks Tasha, I hope it will be.

I'm visiting from Alex's Blog. It sounds fun so I'm signing up!

Thanks for signing up...

Count me in too.

Thanks for taking part, Ricky.

Sounds like a super fun blogfest. I'm looking forward to it!

Pretty cool. I'll have to think about this; I've signed up for so many things I'm a little overwhelmed - and been thinking about a bloging/writing hiatus.

I did post it in my community events calendar in my sidebar. Good luck with the blogfest :)

Nice to meet you Dave.

Nice to meet you to Donna, and thanks.

Everyone's a dork. I'm glad you're part of it too.

Glad to see you have a lot more participants!

OMG noughties! LOL. Very cool idea! You're on my list now... Thanx for stopping by my blog!

Are you going to join us, Tessa?

I confess to signing up for the sake of the homonym, but I will figure out something...

Thanks for taking part.

I'm kicking myself that I missed this! This would have been great. Good news is that I have a new cool blog to follow!

You can still join in if you want...