I've gotten out of the practice of writing my way through the various shows I've been involved in, so picking up where I left off, here's one from 2003: 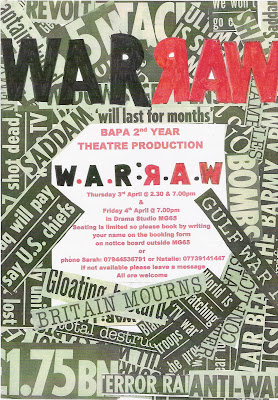 At the beginning of the second semester of the second year at Uni, we were expecting to be in a devised production about love letters.

Instead the international situation regarding Iraq had escalated and the USA's calls for regime change moved our director, Helen Spackman, to create a piece of anti-war agit-prop theatre.

Remember UN Resolution 1441? No? Don't worry about it, nobody else does either. It's been eclipsed by dodgy dossiers and 45 minute claims.

Each member of the cast had to come up with a response to war. I was unsure about this piece for a long time while we were devising it because I felt it was going to be about war as a concept and not necessarily about this war. Debates about the validity of war were usually circuitous and treated all wars with equal contempt. My suggestion that the difference between World Wars I and II was that the latter was something worth fighting for did not go down well.

I was worried that we were not in possession of enough of the facts to create a piece that did justice to the present situation. I wrote a monologue for an Army recruitment officer and I'll post it up here when I can find it. It contains nothing specific to the conflict in Iraq and as such I felt I was part of the problem.

It took three things for me to come around to the idea: the invasion of Iraq without a United Nations mandate appalled me, the ignoring of the obvious wishes of the largest anti-war protest in world history and repetitive mantra concerning intelligence on Iraq's weapons of mass destruction. I knew Iraq had no WMDs. I really did. I could have saved us all a lot of trouble if they had just asked me first.

We were rehearsing during the February and March of 2003 and each day a member of the cast would arrive with a news story that would send us off in a different direction. This Wikipedia article shows just how quickly the situation in Iraq was changing and naturally the show needed to change accordingly.

During rehearsals, I wasted weeks attempting to teach another actor that during stage combat the victim is in charge and that he would have to take a more active role or he'd just get hurt. I was so relieved when the scene was cut.

The show ventured into some potentially controversial territory featuring girls in full hijab dancing to 'All That Jazz' from Chicago based on a story that just such a production had been mounted, although I can't find any evidence of it online now. There was a very real possibility that the University's Islamic Society would shut us down. We also marched down Holloway Road with the girls in a sort of chain gang and the three boys wearing masks like the ones below.

I was Tony Blair (on the right for those who've forgotten him) and a passerby took exception to either my protesting or his foreign policy and was apparently very threatening toward me. In the mask of course I couldn't see a thing and didn't realise that what little I could hear was aimed at me and so I danced right up to him like a fool. If it wasn't for the girls steering me away I could have been the first casualty.

The masks were also used during the show and despite the fact that anyone could have worn them, for some reason it was only the boys and each of us stuck to the same 'character'. In one scene I had to cross the stage in darkness whilst wearing the Blair mask and stand behind a lectern which I could barely see. The lights then came up in a very tight spotlight where the lectern should have been and I had to make Blairish gestures to a soundtrack of one of his speeches. To distract while the girls got changed for their next scene. One night the lectern I was groping around for in the dark was left on different marks and when the lights came up all the audience could see was my right hand bobbing in and out of the spotlight. Of course, in the mask I had no idea.

From a show that I was initially reticent about to coming around to the idea. WAR: RAW is actually something of which I'm now very proud.

Because both my parents had been in the RAF, there was a lot of focus on what they, and my father in particular, would think of the show. He thought it was alright. He didn't agree with a single piece of it and yet could still enjoy it as a piece of theatre, which is probably in a way the best review we could have hoped for.
Posted by Dave at 10:00
Email ThisBlogThis!Share to TwitterShare to FacebookShare to Pinterest
Tags: Acting, Writing

Looking forward to your game picks for Monday's blogfest!

What a bold play. That takes real guts.

Alex, here they are.

Maurice, thanks very much.