For the last few weeks, Abigail Gallagher and I have been preparing for a day of performances of scenes from Frankenstein in a school. Our audience was 200 or so members of Year 7 who are currently studying Philip Pullman's theatrical adaptation of Mary Shelley's novel. 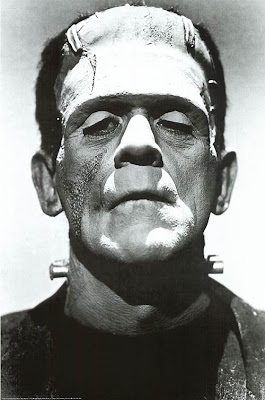 The scenes we performed featured Victor Frankenstein and his cousin Elizabeth, before the Monster is alive, and later between the Monster and his blind friend, Agathe (a character that is an old man in the novel and Pullman has given a genderswap).

We interspersed the scenes with games and activities pertaining to the themes that the school's teachers are hoping to explore. Every session was different, but we managed to provide the same for each group. It went very well and we got a very favourable response from children and teachers alike. I envy the ease with which Abigail dealt with the kids. She was fantastic. I've taught children who are much younger and much older and was initially unsure of quite where to pitch it, but I think I got there in the end. If we did it all again, I would try to squeeze more performance and less activity into each hour long session.
Posted by Dave at 10:00
Email ThisBlogThis!Share to TwitterShare to FacebookShare to Pinterest
Tags: Acting