The Great Globe Itself 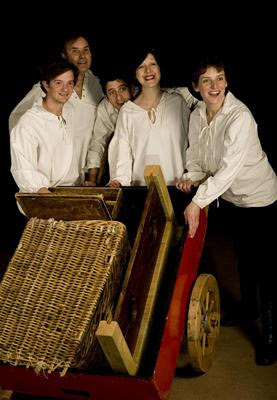 The Globe Players are a theatre company that provide theatre-in-education for schools and employment for actors, providing many actors, including myself, with their first Equity contract thus allowing them to join the union.

The Globe Players are also a family business with a legacy dating back nearly fifty years during which countless actors have worked with them and hundreds of thousands of schoolchildren have seen them perform. From traditional pantomimes for infants to Shakespeare shorts for secondary school children

Recent years have not been kind to the Globe Players and when the credit crunched other organisations, and ironically other globes, began to to encroach on their hard-earned territory.

Now a charity (Registered Charity 1131332) they are hoping to raise money to carry on the work, on the 31st of July a group of them performed a scene from Shakespeare at the end of every Shakespeare Road, Avenue, Crescent etc., in the greater London area.

I couldn't take part because it clashed with the third of the Bike Shed festival shows, so I contributed some cold hard cash instead and I encourage you to do the same, especially if you are an actor who has worked for them, a parent whose child has seen one or more of there shows, a child who grew up watching their shows or a teacher whose life they have made easier.
Posted by Dave at 10:00
Email ThisBlogThis!Share to TwitterShare to FacebookShare to Pinterest
Tags: Shakespeare